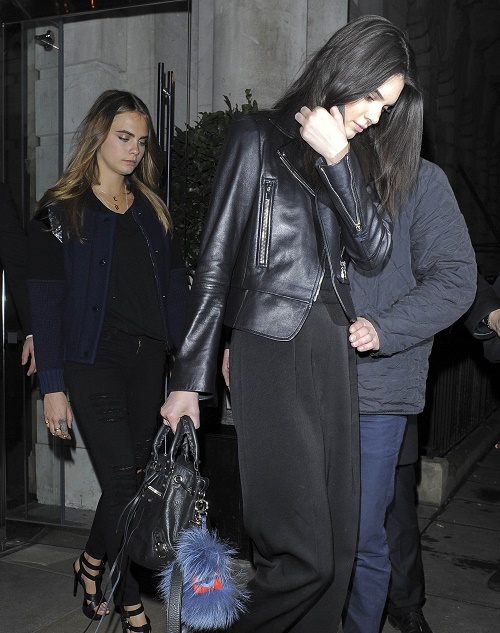 Is Kendall Jenner a lesbian? This is not the first time that rumors have popped up that the model and Keeping Up With The Kardashian star has a thing for the ladies – but the rumors are becoming harder and harder to ignore. Doesn’t anyone else think it is strange that Kendall Jenner hasn’t had a boyfriend in years? Or that she and openly bisexual model Cara Delevingne are inseparable?

Since Kendall Jenner’s modeling career began to take off a few years ago, she has been thrust into the lifestyles of the rich and famous scene, and constantly jet-setting and partying her way across the globe, surrounded by men who love nothing more than a shot with her. She’s a supermodel, there is no way men are not trying to hit on Kendall – but ironically she hasn’t been linked to any men in over a year, except Justin Bieber.

Kendall has been spotted hanging out with Biebs and even holding hands with him. But that the headlines never reveal is that every time Kendall is spotted out with Justin Bieber, her BFF, Hailey Baldwin, was right there with them – and she actually has been hooking up with Bieber! Hailey Baldwin and Justin have been hooking up off and on for months. Why else would Hailey be totally cool with Justin and Kendall holding hands right in front of her – unless she knew it was harmless because Kendall was gay?

Let’s be serious, the only man that Kendall Jenner has even been romantically linked to in months is her drunk brother-in-law, Scott Disick, and we all know there is no way in hell Kendall would ever have sex with Scott, let alone be “pregnant with his baby.”

Do you think Kendall Jenner is secretly a lesbian? Is she hooking up with her “friend” Cara Delevingne? Let us know what you think in the comments below!