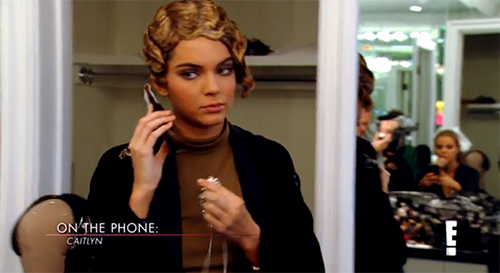 Kendall Jenner stunned at the recent Victoria’s Secret Fashion Show. However, despite it being a momentous occasion for her, she felt as if Caitlyn Jenner‘s potential attendance would pull the limelight away from her! Needless to say, Kendall Jenner Superstar wasn’t happy, as you can clearly see in the clip below. She rips Cait a new one. In the vid, Kendall doesn’t hold anything back: she comes right out saying that she’s mad at Caitlyn for releasing to the media that she’d be at the show.

Kendall goes onto explain that it’s not that she’s jealous of her family – in fact, it’s the complete opposite. She wants people to recognize that she works hard on her own and isn’t riding the coattails of her famous name. While some people might view this as her being jealous (and I’m not saying she doesn’t feel a bit of that), it seems to be that she’s mostly annoyed by the frenzy that never ceases to surround those who carry the Kardashian/ Jenner name. But homegurl should also recognize that she’s extremely lucky to have the platform that she does, and even if she did have to work hard for her current spot in the Fashion World, she certainly had access to a few top connections…to get her Prada heel in the door.

Kendall says on the phone, “Hi dad. I’m very mad at you about something. Did you publicly…did you have your publicist announce that you were going [to the show]?” Because I don’t know how everyone knows and now it’s a huge story, and now I’m actually really pissed at you. You’re going to take the biggest night of my life and take it away from me? Thank you!”

In all fairness, Caitlyn knew that announcing her fashion show attendance would cause a little bit of a raucous in the media – and so why do that if it’s a special day for your daughter, when all the light should be shining on her? What do you think was running through Caitlyn’s head? Was it just another opportunity for her to keep her name in the media – and get another little boost from one of her famous family members? Of course, Caitlyn’s not hurting for publicity, but every chance she has to put herself beside a famous name or event, don’t you think she’s going to take it?

Do you think Kendall is justified in her anger? Let us know in the comments section below and don’t forget to keep checking CDL for all your important news and celeb chatter.