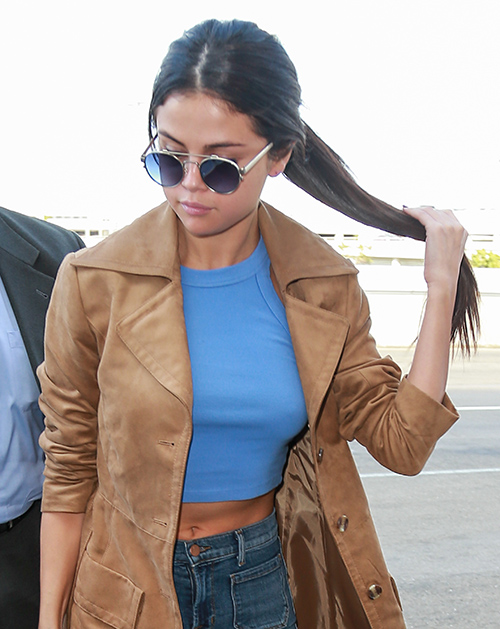 Zayn Malik might be dating Gigi Hadid, but she is not the only young celeb who has her eyes on the One Direction singer. Selena Gomez swears she doesn’t want to be another tabloid story, and hates all of the attention she gets from the press – yet she keeps “secretly” (in plain sight) hanging out with her ex-boyfriend Justin Bieber and making absurd statements during interviews just to get attention. SelGo’s most recent confession – which was surely planned ahead in advance – happened during an interview with In Style UK.

After discussing her dating life, and of course her on-again off-again relationship with Justin Bieber (because isn’t that the only reason any one interviews her), Selena revealed that she is interested in dating former One Direction singer Zayn Malik! We’re pretty sure Justin Bieber is FUMING right now. Selena told In Style that she would love to go out on a date with Zayn Malik if he asked her. She’s actually more interested in older guys – but Zayn gets a free pass. Selena dished, “If he had asked me out on a date, I would be seen with him. Just kidding, but not kidding.

Ironically, just a few days ago Zayn began dating Gigi Hadid – and he is officially off the market. Gigi and Selena have a ton of mutual friends, but they have never exactly been BFF’s themselves. Now, it will be interesting to see how Taylor Swift navigates the awkward waters between her two besties – Selena just made it public knowledge that she wants Gigi’s boyfriend. Meanwhile, Justin Bieber is probably feeling a bit bamboozled, he was just hanging out with Selena this week.

What do you guys think? Does Selena actually want to date Zayn Malik, or is she just trying to stir up some new headlines for herself? How will Gigi and Justin respond to Selena’s comments? Let us know what you think in the comments below!