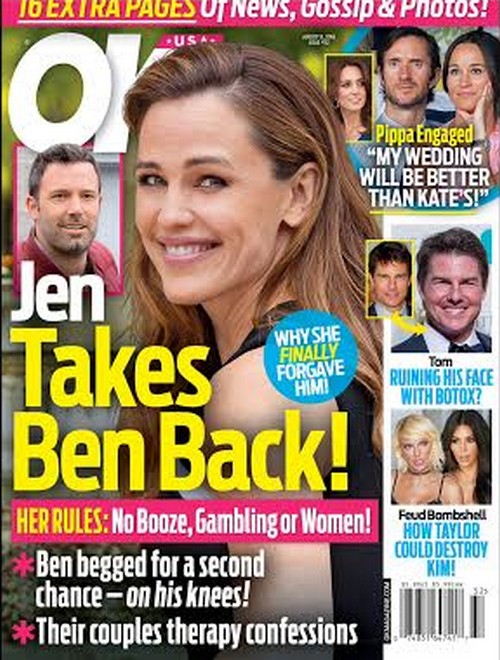 Ben Affleck and Jennifer Garner’s divorce is officially off, and Jen has taken back the father of her three kids – but she has laid down some strict guidelines for him to follow, or else their marriage is over. This week’s cover of OK! Magazine reveals what we have all known for months, Ben Affleck and Jennifer Garner have put their divorce on hold and are trying to work things out.

That has seemed pretty obvious over the last few months when you take in to consideration the amount of time the exes have been spending together, and the fact that their divorce has not moved forward.

This week’s cover of OK! Magazine features a photo of a smiling Jennifer Garner, the headline reads, “Jen Takes Ben Back!” The cover goes on to tease that Jen took Ben back because he “Begged her on his knees.” And Garner has strict rules for her husband, “No Booze, Gambling, Or Women!”

According to an insider, “They are 100% back together. They are acting like newlyweds again and the kids are thrilled.” How does one forgive your husband for cheating on you with your kids’ nanny? It was bad enough that Ben Affleck betrayed Jennifer Garner like that, but the his affair with Christine Ouzounian went public, and Jennifer Garner was made a total fool of in the media.

OK! Magazine’s inside sources close to the couple go on to say that Jen actually felt a little bad for her cheating husband Ben, and “felt like Christine had trapped him.” Really? The insider added, “Not that Ben deserves sympathy, but he has really been working his butt off, under public scrutiny, no less, to prove to Jen that he deserves another chance.”

We’re all for true love, and for better or for worse, but we’re having a hard time seeing Ben Affleck as a victim in all of this. What do you guys think? Is Jennifer Garner crazy for taking him back? Was he really “trapped” by his mistress Christina Ouzounian? Share your thoughts in the comments below!