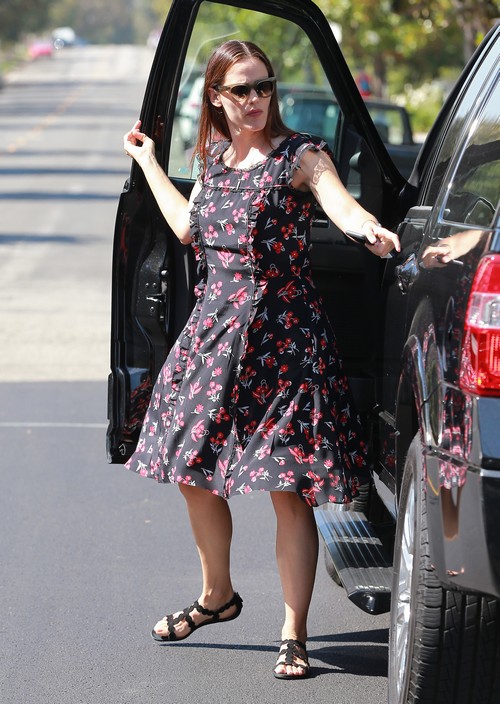 Jennifer Garner pregnancy rumors popped up about when the Hollywood actress was spotted with a sizeable baby bump while she was out and about in Brentwood, California this weekend. And with a possible baby on the way, now everyone knows why Jennifer Garner and Ben Affleck’s divorce has been put on hold for several months now.

In fact, Jennifer Garner and Ben Affleck’s arrangement might be working so well for them that they are probably getting along better as a separated couple than a married one. Of course, they are still legally married – with Ben Affleck even calling Jennifer Garner his ‘wife’ during Bill Simmons’ HBO show ‘Any Given Wednesday’ last month – but a pregnancy will definitely confirm that these two are staying put.

As many fans can remember, Jennifer Garner’s third pregnancy back in 2011 is the reason why Ben Affleck stayed in his marriage. Otherwise, he would have been long gone considering how he’s had one foot out the door for years now.

Jennifer Garner’s pregnancy might not fix the problems she and Ben Affleck have in their relationship, but if history is to repeat itself, it’ll definitely keep the ‘Batman’ actor by her side for at least a few more years down the road.

After all, if Ben Affleck were to walk out from his family now, with three little children at home, his career would be done. No one would be able to forgive Ben Affleck for dumping his family, and worse giving Jennifer Garner three (or maybe even four) children to raise all on her own.

With that being said, if things were really that bad in Jennifer Garner and Ben Affleck’s marriage, there’s no doubt that he would have left a long time ago. Of course, it doesn’t take much for Ben Affleck to go on a slippery slope and the only person who has managed to keep him in line these last ten years has been his wife Jennifer Garner, and of course, his three kids, Violet, Seraphina, and Samuel. Another child on the way would surely complicate matters even further for these two.

Tell us CDL readers, what do you think? Is Jennifer Garner pregnant? Did she plan this pregnancy in order to keep Ben Affleck and avoiding a nasty divorce? Let us know your thoughts in our comments section below.

Jennifer Garner and her kids attend church services in Pacific Palisades, California on July 24, 2016. Rumors are swirling that Jennifer and Ben Affleck are currently trying to reconcile their troubled marriage. FameFlynet