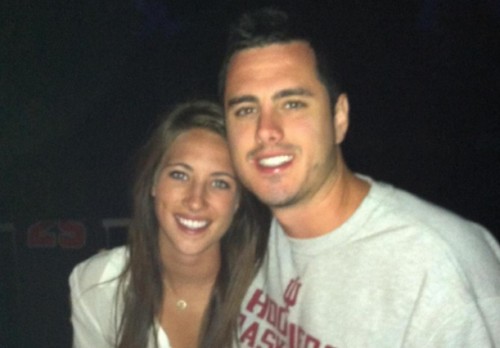 Does The Bachelor 2016 Ben Higgins still love ex-girlfriend Shaelin Adams yet? Is Ben really ready to find the love of his life? In a recent exclusive with Star Ben’s ex-sweetheart revealed that it’s crazy for Ben to think true love can be found on a television show.

Adams believes the only reason Ben agreed to be the Season 20 Bachelor was because Higgins may want to renew his relationship with Shaelin.

Shaelin Adams told the magazine that Ben probably didn’t “get any closure on his side” after their breakup. Does that mean Ben was still smarting after being dumped by Shaelin when the software salesman was vying for Kaitlyn Bristowe’s heart on The Bachelorette?

In a previous interview Ben talked about his one long-term relationship saying, “I loved that person. Did she love me back? That’s hard to say now.” Was that person Shaelin? Ben Higgins and Shaelin Adams dated for about a year while students at Indiana University. If it was, Ben’s college sweetheart isn’t saying whether she loved Higgins or not.

At the time of the breakup Adams thought Ben was relatively mature about everything. Shaelin now believes their parting was tougher on Ben than she thought. According to Shaelin Adams, Ben professed his love for her in several phone calls after the breakup. Did any of the ladies vying for Ben’s heart know this before filming of The Bachelor 2016 began?

Is Ben ready to leave the past in the past and find the love of his life? Even though Higgins revealed in the bio for The Bachelor that it’s time to put the heartbreak behind him Shaelln isn’t so certain that’s the case. Ben’s former gal pal thinks ABC is cashing in on Ben’s sad story of lost love.

What do you think? Will Ben Higgins find love on The Bachelor? Will another happy couple actually walk down the aisle and make marriage work? Let’s face it, TPTB doesn’t really care whether or not people actually find the love. It’s all about ratings and money for ABC executives. Will Ben walk away brokenhearted again? Or is Shaelin right? Is Ben still pining way for his ex-girlfriend?

Let us know what you think in the comments section below and come back to CDL for the latest news on The Bachelor.