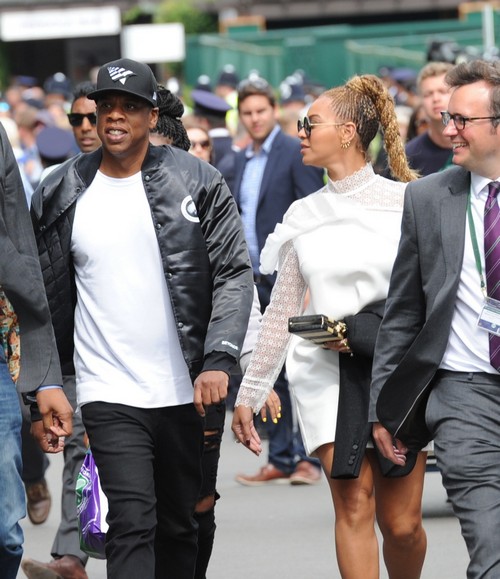 Beyonce and Jay-Z made a rare public appearance together and it was at Wimbledon on Saturday, July 9 to show support for Bey’s longtime friend, tennis star Serena Williams. Bey and Jay’s stellar seats were no surprise, as well as the couple’s fake moments of PDA for cameras.

The couple sat in the player’s box on Centre Court with Venus Williams and the rest of Serena’s family to watch the tennis great take the big win.

Following the release of Beyonce’s controversial hit Lemonade album came the news that the power couple are now looking to try and save their marriage, or maybe just their public image following Beyonce’s enlightening visual album? Was this part of the big plan to make it look like the Hollywood couple is giving their broken marriage a jumpstart?

Attending the tennis finals was clearly a smart move on their part. Wimbledon is a highly televised event with celebrities flocking from all over, giving Bey and Jay the chance to make a public appearance all for show.

The two were seen at center court looking casual with smiles on their faces in their own set of tennis whites and black sunglasses. Both, Beyonce and Jay-Z leaned over periodically to exchange brief words with one another in between cheers for Serena Williams.

At one point Bey was seen looking rigid, telling her husband something discreetly as she covered her mouth with her hand. Were the two have words while sitting behind the Williams’ clan?

It’s surprising the two could stomach each other for so long! They clearly didn’t have to talk all that much during the intense match as cameras took plenty of candid shots of the musical couple as they raised their hands and clapped to cheer on Williams.

Serena Williams recently appeared in Bey’s video for her hit song Sorry, her pop track that talks about Jay-Z’s extramarital affairs with a woman Beyonce has coined “Becky with the good hair.” Falling the release of the song, many where trying to figure out the true identity of Becky?

“I’ve known Bey for a long time,” Serena told WSJ Magazine last month. When discussing her appearance in the video for Sorry, Serena only shared that she “got really sore from dancing!”

Other celebrities who made an appearance at the Wimbledon aside from Beyonce and Jay-Z included talk show host Ellen DeGeneres and her wife Portia De Rossi. It isn’t a secret the two also have their own troubled marriage.

Thor actress Natalie Portman and Rashida Jones also attended, keeping each other company in the stands.

Game of Thrones actress Maisie Williams was seen rocking her new blue hair. She was also spotted speaking with DeGeneres and De Rossi for a bit. The trio was all smiles.

An outpouring of celebs who did not attend the match took to Twitter following Serena’s win to send their congratulations. Former Will & Grace star Debra Messing, several Orange Is the New Black cast members, Wolverine star Hugh Jackman and Scandal’s Kerry Washington were among the many.