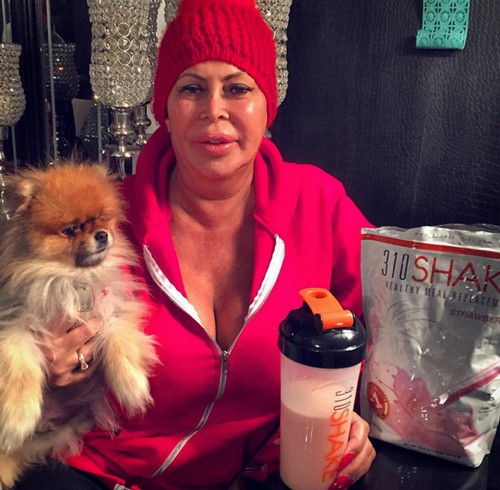 “Mob Wives” Big Ang is dying of cancer and Real Mr. Housewife reports exclusively that Angela Raiola has been read last rites. On Tuesday, February 16 Ang revealed on “The Dr. Oz Show” that her six-year-marriage to Neil Murphy had ended. The talk show tapes approximately two weeks in advance, so it’s clear that Angela’s health took a turn for the worse very quickly.

Big Ang’s cancer health crisis is so dire that friends and family quickly gathered in her hospital room just hours ago. Things are much worse than “Mob Wives” fans have been told. “[Angela Raiola] is in the hospital and was very recently read her last rites this evening,” a source divulged to Mr. Real Housewife. 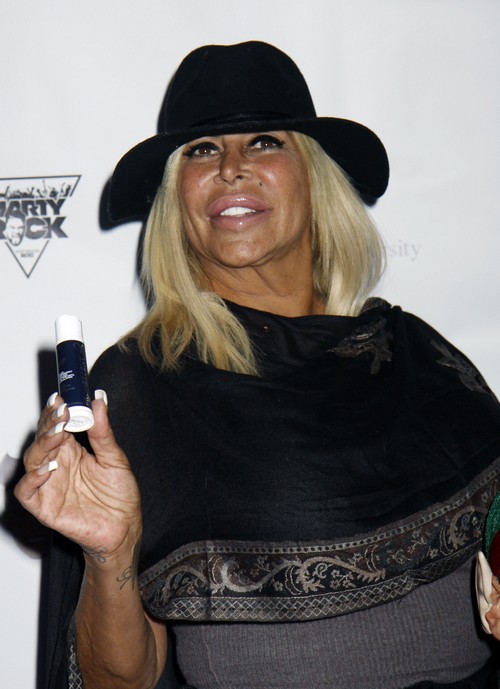 The insider continued, stating that everyone is praying for Ang but there’s no telling how much longer the reality television star has to live.

Ang was diagnosed with throat cancer throat cancer in March 2015 and revealed that even though she had smoked for 40 years she quit smoking that very day. Angela underwent an eight-hour surgery to remove a tumor the size of a lemon that was blocking Raiola’s airway and making it difficult for Raiola to breath.

During that surgery doctors also removed the lymph nodes on the left side of Ang’s neck. Angela was declared cancer-free in October 2015. Raiola’s cancer journey was documented during the sixth season of VH1’s “Couples Therapy with Dr. Jenn.”

“Mob Wives” sixth season premiered on January 13, 2016 and Ang’s struggle is reportedly going to be documented on the reality show as well.

But in December 2015 the cancer had returned and doctors feared it may have spread throughout Ang’s body. At the time Angela Raiola and her family planned to meet with specialists to discuss the “Mob Wives” star’s options and best course of treatment. 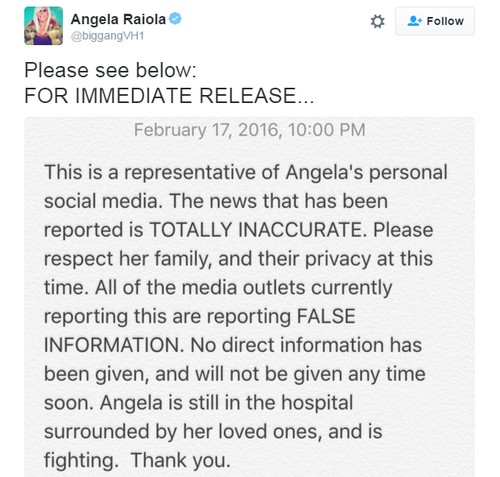 Update 22:35 EST Wednesday Feb. 17 – Reports that Big Ang is dead are apparently premature according to her rep – her Twitter just reported that she is still alive and fighting for life.

This is @vinniemedugno on behalf of the family of Angela Raiola, please see below: pic.twitter.com/wiuPApr9Lw

Guess who became a grandma again! This little bundle of joy is what makes it all worth while. This is just what I needed this week. I’d like you to say hi my baby to Anjolie Scotto! She was born last night and is a healthy 6lbs, 7oz with gorgeous black hair! I love her so much. Yes, I’m going to spoil her as well haha. 💋👶🏻