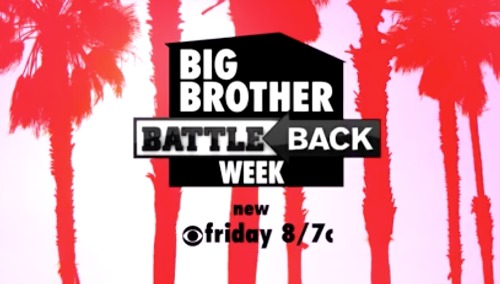 Tonight on CBS Big Brother 18 airs with an all new Friday, July 22, season 18 episode 15 and we’ve got your Big Brother 18 recap down below! On tonight’s episode, four “Battle Back” competitions take place.

On the last episode, a houseguest was evicted from the compound. Did you watch the last episode? If you missed it we have a full and detailed Big Brother 18 recap, right here for you.

On tonight’s BB18 as per the CBS synopsis, “Four “Battle Back” competitions take place, with the winner returning to the house for a second shot at the $500,000 grand prize.”

Julie introduces videos to the special Battle Back episode. She says that Glenn, Jozea, Victor, Bronte, and Tiffany will have the chance to compete for a chance to return to the house. There’s a recap that details how each of those HGs me their evictions.

Julie comes back and says tonight history will be made as the previously evicted houseguests go head-to-head in various competitions. As of now, the current HGs don’t know a player they’ve evicted will be returning.

In the first comp, Jozea and Glenn compete. The winner will be advancing to the next stage. The first competition is a race across balance beams. The goal of the comp is to retrieve berries and put them in containers. There’s a short path, which is more difficult, and a long path, which is less difficult.

The two begin playing. Jozea is, of course, completely full of himself and not worried about losing. J gets the first berry. But, soon, he falls twice – this makes him lose all the berries he currently has.

When the rain starts pouring down, they’re both neck and neck. Glenn goes for the poison berry, which would knock out all berries currently in a column, but Jozea manages to finish his current column before the poison berry is locked in place.

Soon, Jozea wins the comp and beats Glenn. He’ll be advancing to the next stage.

When the show returns, Jozea takes on Victor in a new competition. They’re both sad that they have to compete against each other, seeing as how they were both very good friends in the house.

The goal of this comp is to knock down targets with tennis balls by launching the balls off a bouncy tennis racket. They each have 3 balls to use and when they run out they must retrieve them.

Victor knocks down his second target. He now has two targets down.

Victor tells himself to focus! They are both exhausted.

Victor knocks down his fourth target. He only has one left to knock down. It’s the hardest target to get.

Soon, Victor manages to knock over the last target. He will be advancing to the next round.

Next, Victor and Bronte will face off.

Bronte comes out onto the field shouting “girl power.” The competition is a question and answer game. It’s a memory comp. There are pictures featuring the houseguests currently in the house in various locations around the world. Bronte and Victor will have the chance to look at all the photos. Then, they’ll have to answer questions about them.

It looks like a tough comp. Victor says that his mind can’t comprehend what’s going on right now.

Both of them race fast. Victor locks in his answers first, but he has 3 incorrect answers – but they don’t tell him which ones are incorrect.

Bronte locks in her choices. She has 5 incorrect.

Victor locks in his answers a second time. Now, he only has 1 incorrect.

Bronte locks hers in again. She still has a whole bunch wrong.

Bronte keeps switching her answers in a haphazard manner. Probably not the best strategy.

Eventually, Victor comes out on top. He will advance to the final round.

Next, Victor will be challenging Tiffany. She will probably give him a run for his money. Julie says the battle will be of epic proportions and the winner will be granted passage back into the BB18 House.

Tiffany says she’s blessed to be given this second opportunity. She’s going to “battle her heart out.” She hopes it’s not Victor because he’s a competition beast.

Julie says it’s time to do battle and that the winner of this comp will re-enter the house. Tonight.

This comp is a puzzle competition. They have to complete the puzzle using pieces provided.

Tiffany says she’s looking forward to this competition because she’s good at puzzles. In addition to completing the puzzle, a schedule is being played via loudspeaker. They must use those clues to also complete a portion of the puzzle – which is a band schedule. The theme of the puzzle is “Electric BB Festival.”

Tiffany and Victor are neck and neck. Tiffany had to correct part of her puzzle, but she was smart and was completing the time schedule portion of the puzzle as the clues were being administered. Victor left this portion to the end. While he had some trouble at first, he ultimately got it done.

VICTOR WILL BE RETURNING TO THE BB18 GAME.

When Tiffany congratulates Victory, she tells him to “trust Frank, don’t trust Day.”

Julie pops into the BB House living room to address the current HGs. She gives them all some stats. She tells them that, soon, one of the HGs will be moving back in.

They all freak out – some are surprised – that Victor walks back into the House.

Julie revealed to viewers and fans (not the HGs) that there’s a secret room in the BB18 House that can only be found by following a certain pattern of clues hidden around the house. Should a houseguest stumble upon this room, an incredible power could be unleashed. This added element will be in play for 4 weeks.