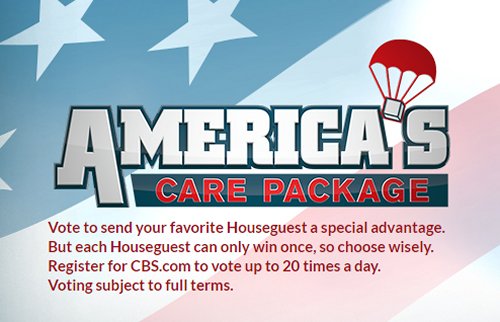 Big Brother 18 spoilers reveal that voting has begun on the America’s Care Package twist and many BB18 fans are already pushing for strategic awarding of the packages to block certain HGs out of better rewards later. Here’s a look at how the voting works and how you can get involved.

Julie Chen revealed the first of five weekly care packages that will be voted on by viewers and awarded to the chosen houseguests. The “twist within the twist” is that once a houseguest has received a care package, they are blocked from receiving future ones. That set social media on fire.

Already BB18 fans are lobbying for votes for the first package to go to a more powerful player because it is NOT a powerful care package and that would block them from receiving better ones later. Big Brother 18 spoilers tease that fans can impact the game with their voting choices.

The five weeks of America’s Care Package rewards are as follows:

The HG voted to receive this care package cannot be made a Have Not for the duration of the BB18 game. Voting ends on July 29 at 1 pm Eastern for this reward.

This one is huge because a HG can block the votes of two HGs of their choice. With the house numbers whittling, this could throw the eviction to another HG. Voting opens on this one runs July 31-August 5.

The co-HoH grants power to the chosen houseguests and strips some power from the reigning HoH. They get to share HoH niceties and select one of the noms for eviction. Voting is August 14-19.

The BB Bribe is $5,000 that the winner gets to offer to another HG to get them to do a favor they ask. The money can’t be divvied between more than one houseguest. Voting begins August 21-26.

BB18 fans began strategizing on social media as soon as the America’s Care Package Twist was announced, particularly for the votes for the first reward, Never-Not, since it carries no real power. Many are hoping for Paul or Paulie to win this one to block them from better rewards later.

The Co-HoH also seems to be very powerful because it should offer safety as well – like the Super Safety – because it comes with the “perks” of being an HoH and one perk is not being eligible to go on the chopping block.

Also of interest is that this twist overlaps with the Secret Room tickets which will carry on through the LIVE eviction the night of August 18 which means there are three more times a ticket envelope will be opened and with only four of 12 opened at all, there’s a slim chance the Round Trip ticket will turn up.

Click here to vote for America’s Care Package and know this – you vote up to 20 times per day and can throw your votes all to one houseguest or spread the love around.

Share your comments below on this latest BB18 game twist and check back with CDL often for tons more Big Brother 18 spoilers including the upcoming Week 6 nominations!