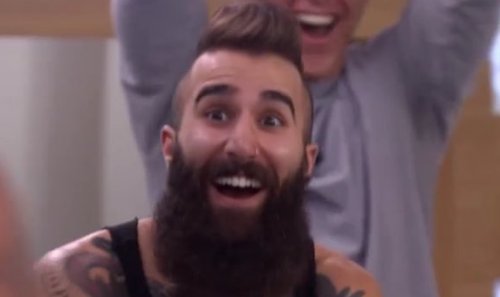 Big Brother 18 spoilers from the Live Feeds reveal the HoH for Week 6 has been won and the coveted title was claimed by Paul. The “Perfect Shot” was a skills comp rather than endurance or knowledge as the more recent HoH comps have been.

As we saw at the end of the LIVE eviction episode, houseguests had to roll a ball down a wavy board. If it fell off into a scoring slot, they earned the number shown there. A perfect pitch that took their ball to the end earned the top score of 21.

A ball that fell off the start or end earned a score of zero. The wrinkle in the competition was that houseguests could practice for as long as they wanted with a yellow ball. When they changed to their red ball, they got one roll that counted.

The four lowest rolls earned Have Not status. If more than one rolled a perfect score, the HoH crown went to the HG that rolled it first so time was also a consideration. The HGs all chose to take a number of practice rolls to try and build their skills up.

But in the end, it was Paul that won the competition. So who will the mega beard-master target? The talk this week among the guys was to target two ladies – and Da’Vonne and Zakiyah’s names were mentioned a lot. Da’Vonne was working on

Da’Vonne was working on breaking up showmances. Bridgette went into the HoH comp terrified of HG reprisal and them coming back to take her out like they did Frank. Michelle has been scared that Bridgette would come for her over the unused PoV.

But who will Paul nom? It definitely goes against his favorite buzzword “friendship” but who will Pual nominate? Hmm. It’s hard to say because he’s been lying all over the house and blabbing back and forth to different groups.

To use his own phrase against him, Paul has been pretty “sketch.” If Paul sticks with the bro-down group, two ladies should go up on the chopping block. But Paul has also been eyeballing Nicole and Corey.

Paul has also been running back and forth to Day and flirting somewhat with Michelle. Could be Nicole and Bridgette that land on the block.