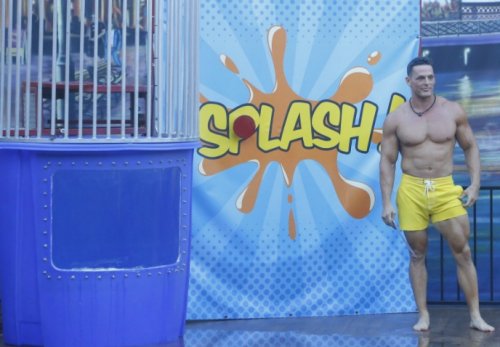 New Big Brother 18 spoilers reveal that there’s a special bonus episode of BB18 scheduled for Friday, August 19 and BB fans have been chomping at the bit to know what they’ll see and why there’s a mystery episode out of the blue. Here’s what you need to know.

The Live Feed cams went down for several hours on Monday and left fans wondering what was up. It was a special treat for the BB18 houseguests – a backyard carnival featuring Ziggy Marley including prized and hosted by Mr PEC-Tacular aka Jessie Godderz.

We’ll see on the Friday episode, in addition to the reggae concert, the carnival which featured a prize competition hosted by Jessie and there is supposed to be an advantage for the next HoH comp. Both Week 8 nominees Paulie and Corey played, so we’ll be seeing an evicted HG on a future episode. 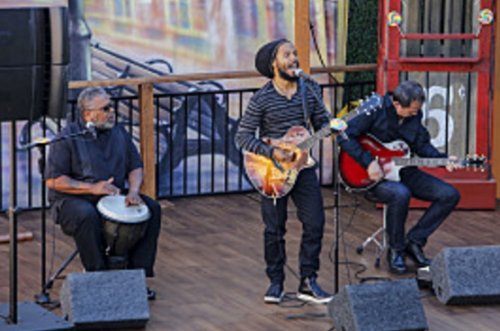 Big Brother 18 spoilers have teased that if the Week 8 evicted houseguest (very likely Paulie Calafiore) does NOT have the Round Trip ticket, we might see a juror competition to bring someone back. With numbers in the house dwindling, the body count is still off for the September 21 finale.

There is also some talk that we may see a video montage of all of Paulie’s atrocious behavior after he was nominated and leading up to the Week 8 Thursday LIVE eviction. When the Live Feeds came back from the carnival and concert, we discovered that they drew numbers and Have Nots were decided.

In case you don’t know Jessie Godderz, Mr PEC-Tacular was a BB10 and BB11 houseguest and was brought back by CBS to guest on BB12, BB13 and BB14. In BB14, he was part of the Pandora’s Box twist. Sneak peek photos from the special episode show Jessie in a dunking booth. 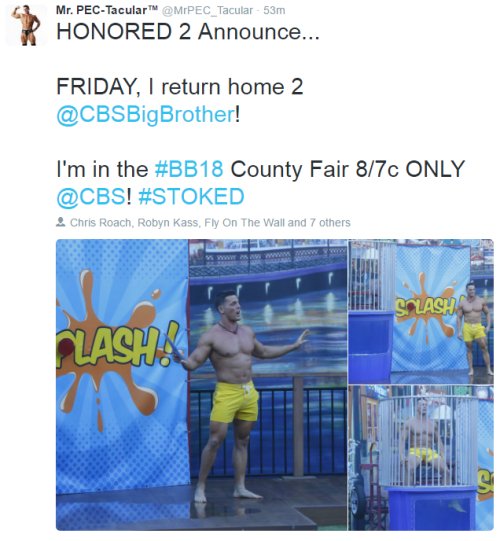 With Corey’s past as a college baseball player, we’re wondering if he’s the one who dunked the egotistical PEC man. There has also been talk that BB18 showrunners have rigged Big Brother to ensure that Paulie Calafiore will return to the game.

Paulie has also apparently received preferential treatment when it came to the Zingbot punishment because he was the sole punished participant not forced into a ridiculous costume 24/7. Corey and Paul were also punished and have gamely obeyed the BB18 rules.

But Paulie refused to comply, ignored repeated calls to the Diary Room to get his costume and finally emerged with a very conservative costume (just a hat and apron) and isn’t wearing it except when he has to bake pies – also part of the punishment that he refused to do for a while. 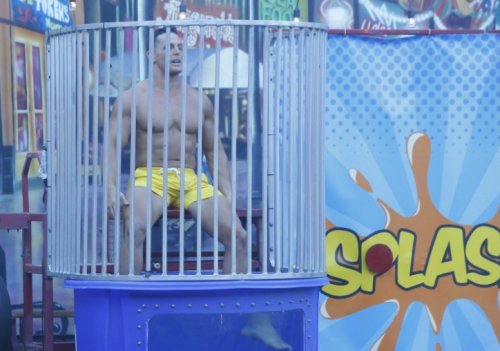 We’ll see if Paulie will feature prominently in the special Friday mystery episode or if BB18 producers have wisely edited down his appearances. Paulie seems a lock for tomorrow’s LIVE eviction and many BB18 fans will be happy to see him gone and may not want to see him on the Friday show.

What do you think BB18 fans? Are you tuning in for the special Friday episode of Big Brother 18? Are you hoping Paulie Calafiore is the Week 8 evicted houseguest? Share your comments below and check back with CDL often for all the latest Big Brother 18 spoilers and LIVE recap of every episode all season.