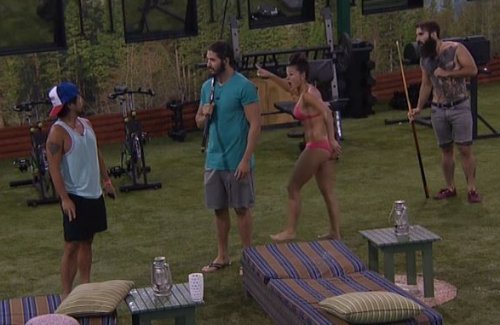 New Big Brother 18 spoilers from the Live Feeds reveal that things are shifting leading up to the Thursday LIVE eviction and the target could change. A heckler outside the BB18 house has shaken up the game with a (possibly) major reveal that the houseguests did NOT see coming.

Late on Tuesday night (Week 11), James, Natalie, Victor and Paul were hanging out in the backyard when they heard a noise over the wall. Ironically, prior to this announcement, James had just been telling Natalie that she was his ride or die even though they seem to be in the friend zone at present.

Then they heard the noise, James ran to a closer spot to hear and Natalie hopped up out of the hot tub. Victor and Paul joined them while they all strained to hear. Natalie seemed to be the first to make sense of the words they could barely hear.

The BB18 heckler repeated via megaphone, “James and Nicole – Pregame alliance.” BOOM. Victor started to repeat what he heard and then BAM, the Live Feeds went to fish as production shut it down. After 30 minutes of swimmers, the Feeds were back.

Natalie and James apparently had some angry interaction on the hiatus. James and Natalie have been bickering for days over their broken showmance and the other houseguests have also been talking about it. Whether the heckler’s info was legit or not, it could still mess up James and Nicole’s game.

Natalie grilled James on whether or not the Final Two deal the heckler revealed exists. She said if “what they said was true” it made her sad. BAM. More fish. When the feeds came back up, James said, “I promise you… me and Nicole have never spoke about a final two, final one, final three…” 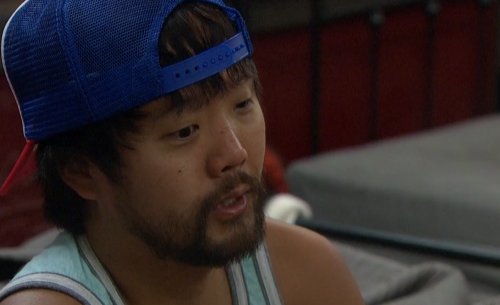 He said only the final four she was in had been discussed. Hmm… Back when Paulie was in the game, he mentioned that him, James and Nicole talked game before the sequester which is a no-no. But James did admit to Natalie that he felt like he could trust Nicole.

The big question is, could this change up the eviction plan to boot Natalie. The answer is, probably not. If Nicole wants James to stay, she will vote to evict Natalie and Corey will vote the way she wants because he doesn’t have much backbone.

That leaves only Paul voting against James, if he and Victor decide NOT to go against Natalie. Nicole has done a good job of convincing them that Natalie is a bigger threat. But in late night cuddle chats between Nicole and Corey, she’s already talking about targeting the bromance. 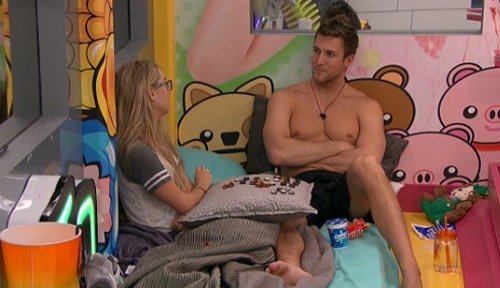 The Week 11 eviction target still looks to be Natalie despite the heckler’s “inside” info and how Week 12 plays out will all come down to who wins HoH. If Nicole, Corey or James win it, they can flip on the Paul-Victor bromance. If Paul wins it, Nicole will stick with the guys.

Also, here are some Big Brother 18 spoilers on upcoming events. The LIVE eviction this Thursday, September 8 is the last Thursday show of BB18. The HoH that starts on the 8th will be the standard Big Brother slip-and-slide fill-something-up comp.

Then on Sunday, September 11, we’ll see the results of the HoH comp as well as nominations. However, this is where things get wonky. On Monday, September 12, CBS is bringing in a studio audience to tape an eviction that’s part of a Fast Forward. 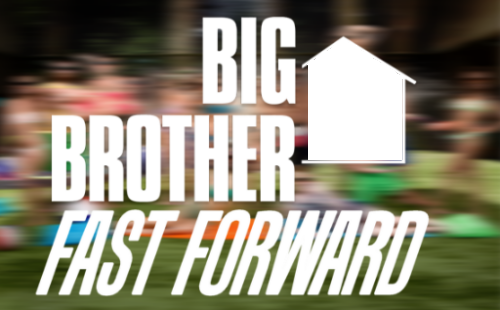 Then on Tuesday, September 13 we will see the Fast Forward eviction that was “live” to the audience but not live to us along with the HoH, PoV and PoV meeting. There’s no word yet on how much of this will be available to those watching the BB18 Live Feeds.

Then on Wednesday, September 14 there will be a truly LIVE eviction. That means one houseguest goes home this week and TWO next week. That will carry us to a Friday, September 16 episode with likely NO game play but a memorial type of show looking back at the BB18 season.

Then on Wednesday, September 21, we’ll have the BB18 LIVE 90-minute finale. Be sure to check back with CDL often for more Big Brother 18 spoilers plus LIVE recaps of every episode left in the BB18 season.