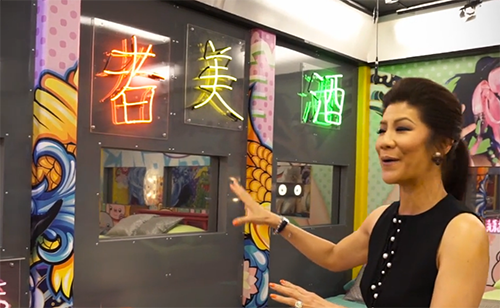 Big Brother 18 spoilers are rolling out as we get closer to the June 22 premiere and today CBS released info on the newly redesigned BB18 house with its international “Summer Vacation” theme. Here’s a look at what you’ll see when the Big Brother 18 houseguests head inside – all the pics are below!

Julie Chen took BB18 fans on a tour of the new house and it’s amazing. The living room looks like an airport departure lounge and what’s coolest is the two chairs for nominees sent to the chopping block have an airplane vibe as well.

The travel vibe carries over into all the rooms. The first bedroom is Tokyo-themed and is heavy on anime, pop-art motifs, plus neon signs and lights. That bedroom is visually busy and we wonder if the neon wall art will stay lit 24/7…

Then, Julie exited through a yellow Japanese phone booth, complete with phone and headed into the next bedroom. The phone booth in between the bedrooms can be used to summon people from the upstairs phone near the HOH room. Nice touch to drive the houseguests crazy.

Julie admitted the London-themed bedroom was her favorite in the house. It’s got a red British phone booth, a fancy tea set, Union Jacks all over, and a really wonky cool lamp made of bowler hats. It’s an amazing room.

The kitchen has a giant Lazy Susan with a compass on it, planes all over, stacks of decorative luggage and a wire frame Eiffel tower. The kitchen island base is a giant piece from a 727 airplane. Very cool. There’s also an African safari themed room that rocks.

The room is replete with traditional elements including masks and fabrics. The bathroom has been redone Caribbean style. The backyard also got a facelift in including a new swimming pool. The pool is bigger and is tucked up against a new Jacuzzi.

The hammock is there as usual and there are also new chairs, awnings, screens all over, and a red felt pool table. Upstairs on the way to the HOH room is a collage of transportation artifacts along the wall.

At the end of the hall, you can see the traditional US type phone booth from the 70s where HOHs can dial down and call up other houseguests. There’s a private lounge for the HOH and his or her pals to hang out.

The HOH bedroom this year is done up Hawaiian style. The headboard is an incredible saltwater fish tank atop the King sized bed. The bathroom is less than private – there’s no door to keep prying eyes off the HOH as they shower but there is a Hibiscus patterned wall that partially conceals the area.

Check out the full walk-through video below with Julie Chen acting as tour guide. The rooms look amazing and we’ve already got the Big Brother spoilers on the first 12 houseguests, but we’re still waiting to hear the names of at least four more to round out the BB18 roster.

Stay tuned to CDL for all the latest BB18 spoilers, news and LIVE recaps when BB18 kicks off on Wednesday, June 22.