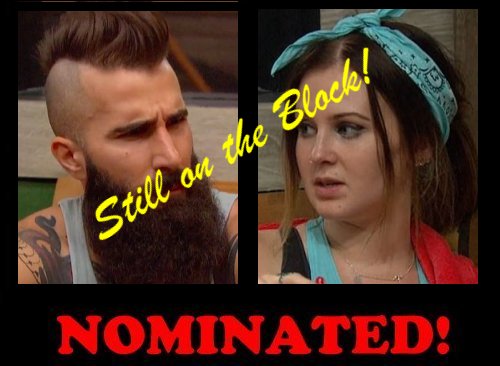 Fresh Big Brother 18 spoilers from the Live Feeds show that the BB18 Veto Meeting was held this morning at the house and Nicole chose not to use her Power of Veto. Nicole, Corey and their new “Final Four” allies Victor and Paul debated nominating either Natalie or James.

The foursome discussed the option of backdooring one of the other showmance partners but then they ultimately decided that Michelle was too much of a wildcard to leave in the house. Paul was totally on board with this since he despises Michelle. Now we know that Nicole did NOT use her Week 10 Power of Veto.

We’ve seen all season long that Big Meech can be a big bully. She, Da’Vonne and Zakiyah terrorized poor Bridgette almost up until the Cabbage Patch Kid was evicted and it was all about Michelle’s crush on Frank and her jealousy of Bridgette’s friendship with the veteran.

Paul has shrewdly observed that Michelle will wait until she knows the cameras are off before she shows off her worst behavior and he also echoed the sentiment that she’s a bully and had been awful to him and others in the house. Because of this, he’s fine being a pawn on the block.

Michelle did clean up her act during the America’s Care Package weeks and she was rewarded with a co-HoH prize, but she’s been back to being awful, at least according to Victor and Paul, when the cameras aren’t trained on her. As a superfan, Meech is a known threat, so it makes sense to evict her.

What will be next is for Nicole to try and avoid having to break a tie to send out either Paul or Michelle. Voting in the Week 10 eviction will be Corey, Natalie, James and Victor. Corey and Victor will vote to evict Meech but it looks like Natalie and James will vote to evict Paul since they see him as a threat.

However, Corey can use his #BBBribe to buy James or Natalie’s vote to evict with the $5k. However, this would also show Nicole’s cards because they would have to make it clear Meech is going anyway because Nicole would break the tie in Paul’s favor and evict Michelle.

As of now, it seems like a lock, according to Big Brother 18 spoilers from the Live Feeds, that Michelle will be the Week 10 evicted. What do you think BB18 watchers? Will you be happy to see Michelle walk out the door?

Share your comments below on the BB18 Veto Meeting results and check back with CDL often for all the latest Big Brother 18 spoilers and news.