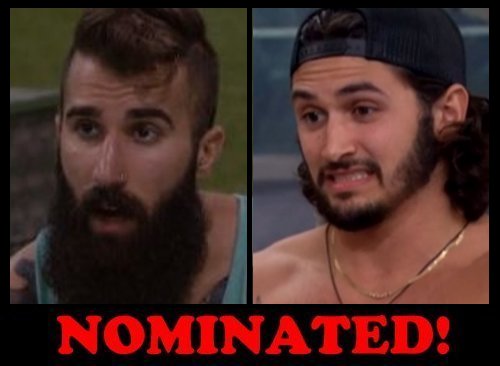 New Big Brother 18 spoilers from the Live Feeds reveal that the Week 12 nominees are Victor and Paul since HoH Corey put them on the BB18 Chopping Block. Victor and Paul should have known at least one of them would be nommed, but they seemed clueless.

Nicole and Corey had locked in the Week 12 targets right away and decided Corey would go hard against Victor and Paul. Corey rehearsed his nomination speech and said he was going to tell the two power players that he put them on the Chopping Block because they’re strong players.

Corey even joked to Nicole that he was going to say he’s playing “Big Brother not Big Baby.” We won’t get to see that until the Sunday episode of BB18 but it will be funny if he included the quip in his speech. Nicole encouraged him to say it, so we’ll see.

Before nominations, Paul and Victor talked in the safari room about their odds of being nominated. Doing the math, the guys had to know that Corey was not going to nominate Nicole which means one of them would go up against James – at a bare minimum.

Victor told Paul before the Nomination Ceremony that if Corey nominated them both he would feel betrayed because they’re not just in an alliance but a deep friendship. Wow. I guess Paul will clearly say after their nomination that it was “not friendship” at all.

Victor also told Paul that he would not put Nicole up against Corey if he was in their position and says the weakness of the Sitting Ducks is that they put their trust in people that betray them. Paul tried to calm Victor down and assured him that Corey would give them the heads up.

Corey and Nicole are hoping that either Nicole or James will win the Power of Veto since all five of them will be playing. That way, they can leave the noms the same and send their target Victor out of the house at the end of Week 12.

Victor is a comp beast so if they can send him out, that’s a solid strategy. We’ll see how it all works out. Victor was on edge all day in advance of the nominations. The houseguests seemed to be on lockdown and Victor was flipping out.

Victor said he was tense, had a headache and wanted to punch something. He tried napping, showering, and pacing before he finally settled down. It will be interesting to see how he behaves after noms based on how ratcheted up he was all day long.

What do you think BB18 fans? Did you expect to see Victor and Paul on the block side by side? Who do you want to see evicted in Week 12? Do you think the Nicole and James Final Two deal will happen?

Share your comments below and check back with CDL often for all the latest Big Brother spoilers and news.