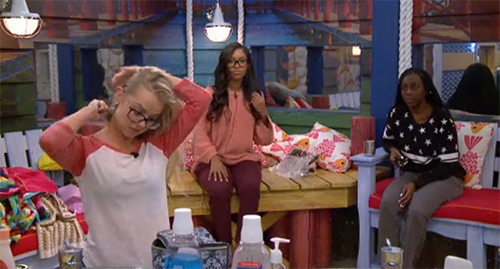 Big Brother 18 week 2 is operating in full force and, as always, we’re preparing for the unexpected. According to Big Brother 18 spoilers via the CBS Live Feeds, things in the BB18 house seem somewhat stable at the moment. The Eight Pack Alliance (8PA) and Paulie have their plans in place to backdoor Victor, but we’ll see how that plays out in the long run. BB18 spoilers reveal that Victor will not be competing in the Week 2 PoV, so it’s looking like he’s as good as done, if the plan remains solid.

Seeing as how Victor won’t be competing alongside Da’Vonne, Zakiyah, Paul, Bronte, and Tiffany in the Veto competition (to be held later in the afternoon on July 2nd), there’s no way he’ll be able to protect himself from Paulie choosing him as a replacement nominee. When one person comes down, another one must go up, as is the way of the game.

As we wait patiently for the Power of Veto competition results, courtesy of the Live Feeds, check out some BB18 Live Feed Highlights from Saturday, July 2nd. Things are heating up in week two. Keep checking CDL for all of your Big Brother spoilers, and don’t forget to leave your gameplay thoughts in the comments section below.

1:08 BBT – Paulie and Paul are playing chess. Paulie tells Paulie the importance of laying low in the beginning weeks of the game.

1:15 BBT – Zakiyah, Mama Day, and Nicole are whispering in the bathroom. They’re chatting about what the outcome of the PoV will be and how Tiffany might chose to use the power should she win it.

1:23 BBT – In the bathroom, Victor continues to teach people how to play his word game, which he thinks is the most fun thing in the world. If he does end up leaving the BB House, which we all expect to happen as of now, at least he will have something to keep him occupied.

1:40 BBT – Paul and Paulie talk about Armenian and Italian culture while playing chess.

2:50 BBT – Houseguests are talking about beach sports, shark attacks, etc. Doesn’t appear as if the PoV competition has been held yet. We’ll keep you updated!

3:00 BBT – Meanwhile, in the kitchen, they continue to play more of Victor’s freakin’ word game because it’s apparently the best way to utilize their time.