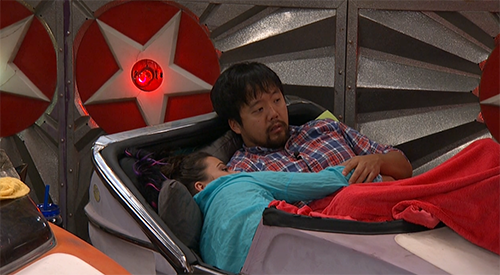 Big Brother 18 spoilers reveal that Corey has won the Week 4 Power of Veto competition and, therefore, has the power to keep the nominations the same or rearrange those on the chopping block. Six players competed in the Week 4 PoV Competition: Paulie, Tiffany, Natalie, Corey, Da’Vonne, and Paul. Given these results, it’s looking like ……

Leading up to the PoV competition, the house was amped with energy, and many conversations circulated amongst the houseguests. According to BB18 spoilers, an interesting chat occurred between Corey and Natalie, both currently on the chopping block. Corey had suggested to Natalie that, should he take home the PoV, that he’d use it to remove her. Haha, what? Yep, he really said that. But, soon after the fact, Corey thought better of his Brilliant Game Plan and revealed to Nat that he was just kidding. Sure, Corey. Sure.

It was kinda clear where Corey’s head was at, though. His line of thinking was that, should he remove Natalie from the block, then Paulie would get the final renom choice. But if Corey removed himself from the block, then the Week 4 Roadkill Winner (Tiffany) would have the final renom choice. Right now, it’s looking like he’ll choose to save himself. Duh.

Another interesting occurrence in the house prior to the PoV competition was Paulie’s laughable and over-the-top-chest-thumping proclamation that he could not be defeated in the competition – and that he could especially not be taken out by Tiffany. Um, sir, Tiffany schooled you in the recent Roadkill comp, so perhaps you should check your ego at the door.

What do you make of this week’s results for the PoV competition? How do you think the coveted Power of Veto will be used? Be sure to keep checking CDL for all your current Big Brother spoilers, news, and updates. The Veto Ceremony results spoilers should arrive sometime on Sunday, so we’ll be sure to post those as soon as we catch wind of them!