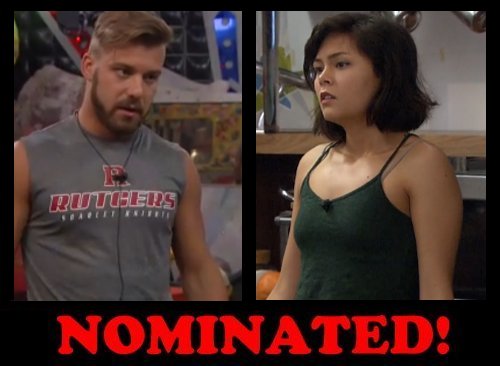 Big Brother 18 spoilers for Week 6 nominations reveal from Live Feeds that Bridgette and Paulie are on the block thanks to incumbent HoH Paul. The current plan is also to backdoor Da’Vonne and put her on the block if one of Paul’s allies win PoV. Here’s a look at the scheming that went into this plan.

Paul may have felt triumphant when he won HoH, but he had no idea what he’s in for since he’s never watched Big Brother. His ignorance of the game has been on display since BB18 Day 1 but he really found out just how hard the game can be and how much pressure there is when you’re in the HoH hot seat.

After Paul’s visit to the Diary Room, the lobbying began. Paul was initially focused solely on getting out Bridgette but then Paulie and others began lobbying hard to get out Da’Vonne. The problem is, none of his other allies know that Paul has been double-dealing with Day – only James seems to have a clue.

Paul was feeling the pressure as those closest to him worked on him about the nominations going the way they wanted and not targeting Bridgette since she’s friendless and willing to work with them and essentially no threat at all. However, Paul remained adamant that Bridgette needed to go on the block.

The plan evolved into Paul wanting a pawn to go up beside Bridgette and then strong players would win the PoV, pull down the pawn and backdoor Da’Vonne. Many BB18 HGs pressured Paul to flat out put up Da’Vonne but he fought that hard and here’s why. Paul has been blabbing secrets to Day.

As soon as the new guys’ alliance formed, Paul ran and told Da’Vonne. If he nominated her, no doubt she would call him out and spill the dirt about all the secrets he’s been telling her. Day has proven, when she called out Nicole, that she will play her game hard and out in the open if need be and Paul is scared.

Paul then sent Corey and James scurrying to their showmance partners Nicole and Natalie looking for a pawn to put up beside Bridgette. The guys told Paul that they needed the noms to be two girls because the numbers are down for guys in the house. Paul did NOT understand the math on that at all.

With the house whittled to 11 and two on the block plus the HoH not voting, that puts four votes in play. If there is a guy and girl on the block plus the guy in the HoH room, that means three guys and five girls make up the voters for the eviction. Paul couldn’t understand why it needed to be 4-4 instead of 3-5.

Both Nicole and Natalie flipped out when the pawn concept was brought to them and both promised to wreak havoc if they won HoH and to go after who nommed them – which would be Paul. In the end, Paulie decided to sacrifice himself and go up as pawn but we all know “pawns go home.”

If Paul, Paulie or whomever else plays in the veto comp doesn’t win and pulls Paulie down, there could be no backdoor play against Da’Vonne and if Paulie was taken out, the guys don’t stand a chance with the numbers they have. With Bridgette and Paulie on the chopping block, the PoV comp is critical.

Stay tuned to CDL for more Big Brother 18 spoilers from the Live Feeds on who wins the Power of Veto and who it gets used on (if at all).