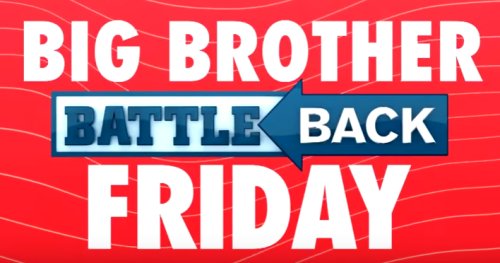 There are five evicted houseguests eligible for the Battle Back comp and return to the BB18 house – Glenn, Jozea, Victor, Bronte and now Tiffany who was ousted on the Week 4 live eviction most recently. Back in BB16, when there as a similar twist that allowed one jury member to come back into the house, Nicole won the competition. 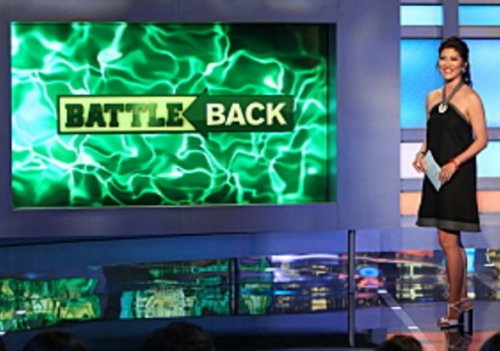 In BB16, it was a shuffleboard like comp where evicted jury members played against each other head to head with several playing at once. That comp was called “BB Boxing” and you can see in the pic below that four evicted HGs sitting on the jury played in the competition. They slid puck-type objects down a course to try and knock others off and earn the chance to get back in the Big Brohter house. 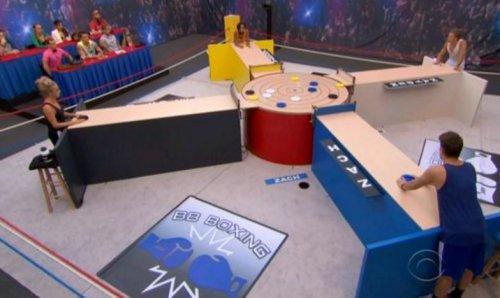 Nicole won it back in BB16 but didn’t survive for long once she returned and was evicted again in short order. On the Thursday LIVE eviction show, we got a look at the four HGs that have been waiting for a chance to come back in but they may struggle, particularly Glenn, who has no idea that the house has turned. He talked big about taking out a vet with no clue that’s not where the lines are drawn anymore.

But who will win it this time and how will the comps be staged? On a new video promo (see clip below) you can see a comp between Jozea and Glenn. It looks like a dead ringer for the Berry Balance HoH competition course which was played just after Jozea was evicted on June 30. The backyard comp courses are elaborate and would be hard to build, take down and rebuild later for Battle Back. 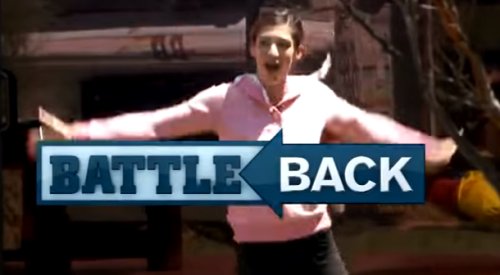 So this clip might indicate that the Battle Back comps have happened in stages, after each eviction, and the winner moved on to face the next week’s evicted houseguest. In terms of set construction expense and time, that would seem logical. Alternately, the Berry Balanced set could have been rebuilt and all five could be playing head to head on the course. 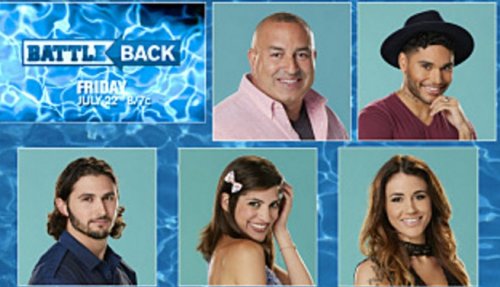 If the HoH comp also became a Battle Back playing field, then it should go this way:

Round 1 – Glenn vs Jozea on Berry Balanced

Round 2 – Victor vs Round 1 winner on Kiss My Ace

Round 3 – Bronte vs Round 2 winner on Euro Trippin’

Round 4 – Tiffany vs Round 3 winner on an unknown comp

If not, perhaps all five will play at once on Berry Balanced, but this seems to be more reminiscent of the set-up of another CBS reality show – Survivor – when the show held Redemption Island battles where the recently voted out tribe member battled the prior each week. We know Big Brother likes to pull in elements (and often players) from other CBS reality shows. 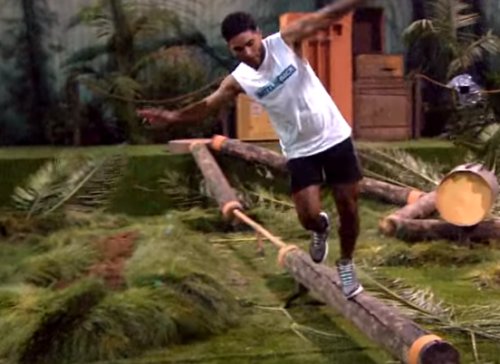 Big Brother 18 spoilers from the CBS promo for Battle Back show that on the Berry Balanced set, Jozea went tripping off of one of the balance beam logs and Glenn looked triumphant as he fist-pumped in the air. Based on this clip, it looks like Jozea was eliminated from Battle Back. If play proceeded week by week, that would pit Glenn vs Victor. 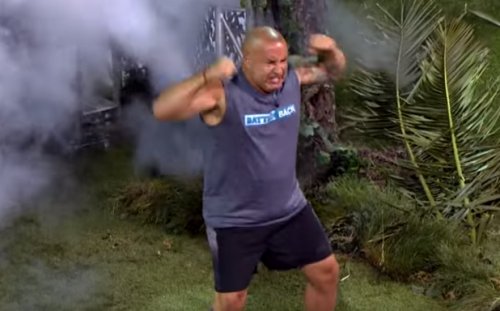 What do you think BB18 fans? How shocked will the houseguests be? A couple of HGs left pretty nasty video messages, particularly Da’Vonne’s message to Tiffany mocking her, so that could come back to bite them once the evicted HG returns to the house. Share your comments below on the BB18 Battle Back comp and check back with CDL tonight for a LIVE recap of the competition and Battle Back return reveal.