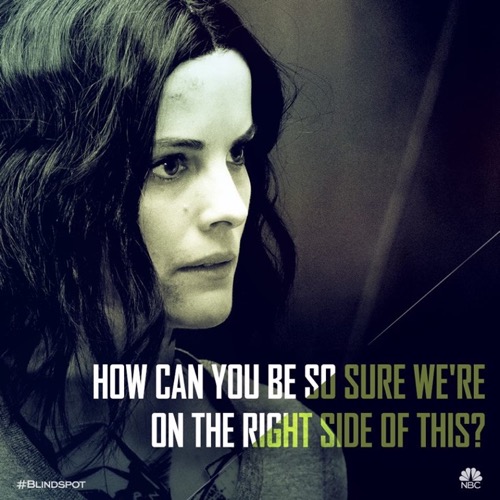 Tonight on NBC Blindspot airs with an all-new Wednesday, September 28, 2016, episode and we have your Blindspot recap below.  On tonight’s Blindspot season 2 episode 3, Jane’s loyalty is tested with an assassination mission.

Did you watch the las week’s episode where the team races to stop a corrupt DEA agent from selling stinger missiles to a drug cartel? If you missed it we have a full and detailed Blindspot recap, right here for you!

On tonight’s Blindspot episode as per the NBC synopsis, “Weller (Sullivan Stapleton) and the team must race the clock to stop a series of escalating New York City bombings, while Jane (Jaimie Alexander) is forced to go on an assassination mission to prove her loyalty…or suffer the consequences.”

Jane was considered to be on her own after she went MIA on tonight’s episode of “Blindspot”. The agency and Kamal in particular had felt that they had given Jane enough tools to survive on her own. Even if she was surrounded by their enemies. So Kamal told if not reminded Weller that they should focus on the case at hand. A DIME Bomb went off at the Brooklyn Navy Yard and there were casualties. Four were dead and up to eleven people were injured. And it didn’t seem as if their bomber was quite done.

A second bomb had gone off in Midtown as Patterson was briefing the team about the bomb at the Navy Yard. So their bomber/ bombers had gone from someone who merely had a message by using DIME Bombs that was supposed to be illegal and no longer in use by the US government to someone that wanted to attack the US Military itself. The second bomb had apparently been right outside of a USO building so other military buildings in and around in New York was in danger. But Weller was surprisingly preoccupied with something else as everything was going down.

Weller had wanted to know where Jane was and so Zapata addressed some of his fears. She had privately talked to Weller and she had asked him if he was worried if Jane was in danger or if she had been turned. However, Weller didn’t have an answer for her and the case was technically more important than his fears. His team had found out that there were two bombers working together and that they were using social media to dedicate their bombs. So Patterson informed Kamal that she could probably trace their IPO.

So Patterson began working on that in case the bombers tried to dedicate a new bomb. Yet, Jane on the other hand was busy trying to prove herself to a woman named Shepherd and Sandstorm. Shepherd had wanted to know if Jane was still part of their group and so she had tested Jane. She had sent Jane out with one of their associates and they had both been given a task. Jane was supposed to hunt down her former mark Jeffrey and kill him. And so Jane’s loyalty depended on whether or not she could complete the job.

Though when the time came, Jane couldn’t do it. Jane had a problem with killing a perfectly innocent man so she instead had tried to turn him. She has turned to her watchdog and had tried to convince him that Jeffrey could still be of use to them and unfortunately that hadn’t been part of the mission. So her associate had taken over where she failed and Jeffrey had still died despite everything that Jane tried to do to save him. And so Jane thought that would be the end of her yet Sandstorm decided to let her go back onto the streets where she could meet up with Weller and the rest.

Weller though had been surprised to see her when she later came in. He hadn’t thought that she would be let go and even Kamal had been wary about what happened. But Jane had explained everything and, while Kamal had been upset that she hadn’t just killed Jeffrey, she still thought that Jane should be out in the field with the rest of them trying to stop a bomber. Kamal said that nothing should look off so she didn’t want to compromise Jane any further. So Jane was put out in the field and in hindsight it might have been too soon for her.

Jane had been traumatized by what happened with Jeffrey and a part of her had blamed herself for being unable to protect him. However, her need to do a good job proved hazardous when Patterson told the team where the next bomb would be and Jane went rushing in with guns blazing. Jane and the others had been told that they needed to find both bombers and take them in. So Jane had actually broken protocol when she decided to do her own thing. She had spotted the bombers however she had killed one of them and mistakenly allowed the other to get away.

So Weller had been upset by that and he had thought it had been too soon for Jane to go back out into the field so he had benched her. Weller had told Jane to stay back at the office and she had had an impromptu session with Dr. Robert Borden when everyone else raced out of the building. The second bomber had apparently regrouped after his partner had died and he had gone on take eight people hostage in order to complete their mission. Yet, he had given up on the DIME Bombs because he had strapped himself to an explosive vest.

The bombers’ mission as it turns out hadn’t only been about the DIME bombs. They had simply wanted to reveal the fact that the US Military was still weapon testing on their land even thought it was dangerous and that people were dying because of it. So the bombers had just wanted to be heard. They wanted someone to apologize for what happened to them and for the illegal testing to stop. Though sadly that dream had been unrealistic. Weller had known that going into the building as he tried to negotiate with the bomber and he thought that he was getting somewhere when suddenly someone took a shot.

Someone had shot the bomber as Weller was talking to him and Weller had almost gone off on the person that took the unauthorized shot. But Kamal hadn’t been worried. She had weathered Weller’s anger and disappointment because she said that she had done her job by protecting the people inside yet Weller had told her that eventually they were going to have to work as a team. So Weller had tried to tell Kamal that she couldn’t just make wide-sweeping decisions on her own and time will tell if they ever begin working together rather than almost working against each other.

So Jane had done what was asked of her. She had gained entry into Sandstorm and she was acting as Weller’s spy on the inside. Yet, Roman had later warned Jane that she needed to become truly part of their organization or he was going to help get rid of what was holding her back. And so Roman had described her attachment to someone else as her rabbit. He said that if she couldn’t wholly commit to Shepherd, he was going to find her rabbit and leave it to bleed out. And so Jane had actually been warned.

And back at the office, Reade was falling so it was a good thing that his friend Zapata ended up noticing that something was wrong.