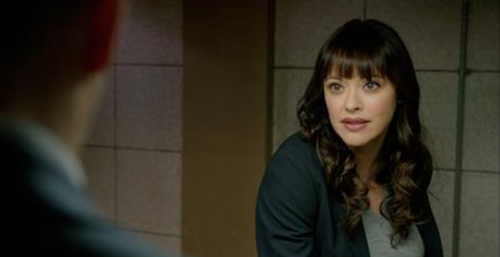 Tonight on CBS Blue Bloods continues with an all new Friday January 22, season 6 episode 13 called, “Stomping Grounds.” and we have your weekly recap below. On tonight’s episode, when a well-regarded, newly retired NYPD lieutenant is accused of shooting a group of potential muggers on the subway and then disappears, Frank (Tom Selleck) must deal with the fallout.

On the last episode, a mobster was killed in his car and retaliation loomed, so Danny and Baez question his errand boy, who was found tied up in the trunk. Elsewhere, Frank struggled to grant a cop’s request for her late father’s shield number because it was also Joe’s number. Did you watch the last episode? If you missed it we have you covered with a full and detailed recap right here for you.

On tonight’s episode as per the CBS synopsis, “when a well-regarded, newly retired NYPD lieutenant is accused of shooting a group of potential muggers on the subway and then disappears, Frank must deal with the fallout. Also, when a drug dealer returns to Baez’s old neighborhood, she and Danny must figure out how to arrest him for a murder that Baez witnessed as a child.”

Blue Bloods “Stomping Grounds” airs tonight at 10:00 pm ET and we will be live blogging all the details. So don’t forget to come back and refresh your screen often for live updates. While you wait for the recap, sound off in the comments down bellow what you think of this season so far and what you think is going to happen next!

A recently retired lieutenant had gotten involved in a shoot-out on tonight’s episode of “Blue Bloods”. Apparently he had been recovering from drinks when someone had tried to steal his wallet. So rather than handle things in a calm if not professional manner, Tim decided to pull out his gun and shoot up an entire subway.

He as former white cop had shot the young black man that tried to rob him as well as another black young man who had unfortunately been nearby. And in spite of the circumstances, no one was going to remember that Tim had been targeted. They were just going to call him another cop killer.

So Frank wanted Tim to be brought in peacefully. However, Tim was playing hard to get. He had no wallet or money on him yet he refused to get into contact with anyone that might help or advise him to turn himself in.

And therefore there was a man-hunt for Tim before long. Jamie’s squad had in fact been put on the case. His squad was currently going through the give-back program which meant they were patrolling more streets than ever in the rougher neighborhoods. So they had been asked to keep a look-out for Tim but Jamie had somehow found himself dealing with Jenko’s problems rather than Tim’s.

Jenko had apparently gone for drinks with her training sergeant. And her superior officer had made a pass at her. Though Jenko had ended up asking him if things could remain professional between them. She said she didn’t want people to get the wrong idea and that she didn’t want to be one of those women that began sleeping with her boss.

Yet her boss had continued to be too “touchy feely” in the oncoming days. So Jamie had noticed it and had later asked what happened. And to be honest, Jenko had told him everything but she had also asked him to let her handle it on her own.

Meaning he didn’t have to have a word with their boss. Though he did so for what looks like his own purposes and that had somehow made things worse for Jenko. Jenko you see had let her boss down gently but after Jamie had basically accused him of harassment – that had made Jenko come across as a threat.

And other cops tend not to like it when one cop seems to be on the brink of being a rat. Or at least what they deem to be a rat. Which is really anyone that wants to blow the whistle on unsafe working conditions.
[2016-01-22, 11:01:49 PM] Kristine Francis: Part 2/2
[2016-01-22, 11:01:58 PM] Kristine Francis: Only Jamie managed to stop his boss from doing anything else to Jenko or any other woman for that because the other man had been sexually harassing the women that have come through his precinct. And had been abusing his position. So Jamie gave him a choice. He said he could either take his evidence to IA or Langley could transfer to open position that just became available in Long Island.

And Langley decided to take the other job.

But Tim Harrison eventually turn himself in. He had gone over to the District Attorney’s office on his own and had asked for Erin to help get in touch with Henry. Henry being the only one that seemed to still want to see the good in him.

Tim apparently had a record within the police department. He seems to have continuously run into trouble with young black men in the past and back in the day it used to be covered up because they had overlooked his racism in favor of his arrest record. But with an investigation about to happen, Frank has decided that he no longer wants the police department to cover for Tim.

Tim had shot one kid who had robbed him yet he refused to apologize for the other young man that had actually tried to help. In his mind, there was no such things as a helping black man and so he stood by his story of the other guy attempting to rob him as well. And that had been it for Frank.

He told Tim that he now had to stand on his own without the police department coming to his defense. And elsewhere on tonight’s episode, Danny ended up doing a good thing for his partner Baez. He talked her into testifying against the local gang leader in her old neighborhood.

So now she’s going to do what she should have done twenty years ago.