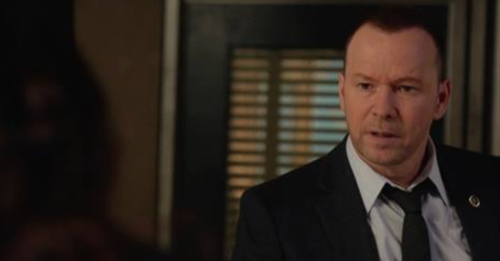 Tonight on CBS Blue Bloods continues with an all new Friday February 12, season 6 episode 14 called, “The Road to Hell.” and we have your weekly recap below. On tonight’s episode, several women admit to murder when their boss is killed, and Danny (Donnie Wahlberg) must pinpoint the real killer.

On the last episode, when a well-regarded, newly retired NYPD lieutenant was accused of shooting a group of potential muggers on the subway and then disappears, Frank had to deal with the fallout. Also, when a drug dealer returned to Baez’s old neighborhood, she and Danny had to figure out how to arrest him for a murder that Baez witnessed as a child. Did you watch the last episode? If you missed it we have you covered with a full and detailed recap right here for you.

On tonight’s episode as per the CBS synopsis, “several women admit to murder when their boss is killed, and Danny must pinpoint the real killer. Meanwhile, Frank and his priest clash over how to deal with a boy who’s a thief; and Nicky and her friends are arrested after drugs are found in her car.”

Blue Bloods “The Road to Hell” airs tonight at 10:00 pm ET and we will be live blogging all the details. So don’t forget to come back and refresh your screen often for live updates. While you wait for the recap, check out a sneak peek of tonight’s episode below!

Little Nicky is not so little anymore. And therefore she found herself in some very adult trouble on tonight’s episode of “Blue Bloods” when she had gotten hauled in on a drug procession charge.

Though to be fair that hadn’t exactly been entirely her fault. Nicky had apparently gone to a concert with some friends of hers when their car had gotten pulled over by the cops. And the cops had been justified in doing so.

Said cops had noticed that the car had a broken taillight and they seem pretty chill about it. Meaning there was a probably a chance that Nicky and her friends would have walked away from the whole thing with a simple warning. But Nicky’s friends, particularly the ones in the backseat, just kept mouthing off at the police.

It seems they had hopped on the anti-police bandwagon but those privileged, white, and educated young adults didn’t understand that they had been in the wrong. So they kept telling the cops they didn’t think they should show the police license and registration. And to make things worse they had then antagonized the two officers by telling them that they were in the wrong for pulling their car over.

And so as part of natural instinct if not curtesy one of the officers decided to take a look in the back. Which was when the cop had noticed the bag of barely concealed cocaine.

Thus it was that officer’s job to ask who that bag belonged to because if no one named names then he would have to bring all four of them down to the station. And that’s exactly what he ended up doing when everyone including Nicky decided that they would rather be arrested than snitch on their “friends”. So that’s when Nicky got arrested.

But unfortunately the foursome had gotten arrested in the Bronx. The Bronx ADA had a bone to pick with Police Commissioner Reagan and though Nicky didn’t go by her hyphenated name – she was still very much the police commissioner’s granddaughter. And it didn’t help that the cocaine found in the car carried a maximum sentence of one to five years.

So Frank didn’t even have to schedule going down to that precinct to see Nicky. His people who know him so well had warned against such a thing from the onset. Though they had been more concerned about the PR disaster if some journalist decided to make his visit looked as if he was calling in a favor.

But that hadn’t been on Erin’s mind when she went to visit her daughter. Erin had been the riding ADA on one of Dany’s cases and so she had been with her brother discussing their Spartacus situation, because four prostitutes were confessing to one pimp’s murder, when Jamie walked in. He had apparently been notified about niece and he offered to be the one to notify his sister because he thought she might need someone to drive her to the Bronx.

So the frightened mother had raced to be with her daughter where there was she was probably also expecting to find out that her daughter’s arrest had been a mistake. Yet not only did she see that Nicky had been in the captain’s office where someone had must have generously offered her a cup of coco but her daughter was still sticking to her story that none of her friends were guilty. And Erin knew, as instinctively as they always do, that her daughter was lying to her.

Nicky knew who the drugs belonged to and she naively thought that drug charges would go away if they all didn’t say anything. Therefore, her mom decided to teach her a lesson and had the cops transferred Nicky to a cell. Where she would stay until the next morning when the courts open at nine.

And in the meantime, Erin went back to working her case. The pimp that had been shot had tricked all of the women he was he holding against their will. There had been on woman who was brought into the country after she was told about a modeling job though Pablo the pimp then told her that she owed him for the mules he used in getting her to the states.

Yet the first women, who looked like she was barely out of her teens, to confess to Pablo’s murder had also had a brother that recently accused of assaulting Pablo. Martina Hernandez had thought Pablo was her boyfriend when one day he brought her back to his and held her captive in the basement with the other girls. So naturally her brother came looking for her and he eventually found her at Pablo’s place.

And therefore it had been part of her brother’s plan to get her out of there. But he had punched Pablo to try and get past him and Pablo had then called the police.

So that made Martina’s brother go on the run because the poor young man was undocumented although Martina had been too scared at the time to attempt to leave with him. And so when Danny later found out that it Martina that had killed Pablo, he understood what it took for her to protect herself.

Though his sister really came to wish rgar he hadn’t sunk her case in order to protect Martina. It seems that by arresting all four people who confessed to the murder, Danny had thrown doubt on the actual case against Martina. And so the only way Erin would be able to re-arrest her was if she made a deal. Hopefully with the bare minimum of jail time if not probation.

But Nicky managed to get some help from grandfather via a third party.

Apparently she had convinced her friend that her family had been so upset by her arrest they had ordered their own investigation and was running the fingerprints found on the bag. So Nicky told her friend that he better make a deal with the Bronx ADA before the results came back. And thankfully he took her advice.

So Nicky had gotten pretty lucky in the end and Frank had been glad to help. Yet not everybody wanted his help and some had even chosen to resist his assistance. Frank you see he had tried warning his neighborhood priest and friend about protecting someone who had repeatedly chosen to break the law over the years. And the advice had been ignored.

Father Quinn had known Mason Reyes all his life and he believed that young man’s rough upbringing had a part to play in his many arrest. So the father had thought the young man simply needed more guidance as well as more chances at turning his life around. And to Frank’s regret, Mason had later pulled a gun in church and ended up accidentally shooting the father.

Thus Frank had hope the incident would have been enough to persuade Father Quinn in knowing when to let go, but no such luck.

Father Quinn had been laid up in the hospital and still believed that Mason wasn’t honestly a bad person at heart.