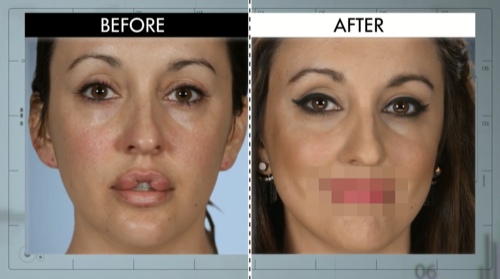 Botched continues tonight with an all new Tuesday, May 17 season 3 episode 2 called, “Man Boobs” and we’ve got your recap down below! On tonight’s episode, Dr. Dubrow helps a mother who looks like she’s been pregnant for 12 years, while Dr. Nassif treats a woman who hasn’t been able to close her mouth since college.

On the last episode in the Season 3 opener, the doctors attempted to fix a botched surgery victim named Rajee whose face was injected with cement. Did you watch the episode? If you missed it we have a full and detailed recap, right here for you.

On tonight’s episode as  per the E! synopsis “Dr. Dubrow helps a mother who looks like she’s been pregnant for 12 years, while Dr. Nassif treats a woman who hasn’t been able to close her mouth since college. Also: A gambler with a serious case of man boobs consults with the doctors.”

Tonight is going to be another crazy episode that you won’t want to miss, so be sure to tune in for our live coverage of E!’s “Botched” tonight at 9PM EST! Meanwhile, while you wait for our recap, hit the comments and let us know how excited you are about this season 3 episode 2?

This week on Botched the Drs. meet with a man named Brian who had “man boobs”. He claims the boobs were put in in order to fulfill a 100,000 bet he had made with a friend. He kept them in for a year. After the year was up he had become so used to them so he just left them in and he has had them for 17 years. He now wants to meet with the plastic surgeons to see if having the breast implants is now a danger for him and if he should have them removed or if it would be ok if he just left them in.

Kearra is dealing with issues with her lips. When she went to get her lips done the nurse suggested only doing the top lip. Kearra agreed and the nurse injected one CC of silicone into her top lip. After a couple of weeks Kearra went back to school and one of her friends asked her “What have you done?” She is meeting with the surgeons to see about getting the two masses removed. They meet with her and Kearra is told by the surgeons “This isn’t surgery that we usually do because there are two separate masses on your lip so it’s not like you can just go in and remove it and be done.” Kearra tells them “I understand, I just need to have it fixed before it gets continually worse.”

Jessica is meeting with the Drs. to see about fixing her stomach after an emergency C Section. She has a scar from the removal of her right fallopian tube that looks like an upside down butt. Drs. Nassiff and Dubrow meet with Jessica to discusss how she’d gotten her scar. When Jessica comes in she tells the Drs. that she received her scar as a result of cepsis. They tell her “You obviously now have a serious issue.” Dr. Dubrow says “I really need her to think about what she is doing because this procedure will require major recovery time.” Dr. Nassiff tells her “This is a major surgery. It’s not just a tummy tuck.” This surgery can really help you, but there are also all kinds of risks if you don’t follow the instructions we give you.” Jessica says “I’m glad to know that I am fixable and that I don’t have to live with this for the rest of my life.” Dr. Nassiff tells her “Let’s turn this butt back into an abdomen.”

Brian is playing tennis with his friend. He talks to him and tells him “I am a little worried about what they will say because the usual life of the implant is 10 to 12 years and I have had mine for 17.” Brian says “I think they are going to tell me that I need to remove them, but what if they can’t?”

Jessica heads in to the office to have her surgery. Dr. Dubrow tells her “My goal is to erase what was done to you. If I can erase it physically then you can get rid of it emotionally.” Jessica is very excited. Dr. Dubrow starts the procedure by doing liposuction. He says “You have to be careful when and where you do liposuction.” He is worried about her Post Op because of the infection she acquired during her C Section. When they open her up they see a lot of bleeding and they also discover that she has a very large hernia. They are able to fix the hernia and they got rid of the front butt. The surgery is a success.

Dr. Nassif and Dr. Dubrow are now discussing Brian. When Brian comes in he immediately wows them with a magic trick. Then he tells them his story. Dr. Dubrow tells him “I think you really just wanted to have breasts.” Brian say “No I didn’t but I did find that they were great for picking up girls.” He asks Brian “What can we do for you today?” Brian says “If I thought I could keep these in with no health issues that would be great, but I need to know.” Dr. Dubrow tells him “We need to examine you.” When they look at him he tells him “You are at least a big C cup.”

They tell him that he can leave them in because they are not dangerous. Another option is to remove them, but if he does he will be left with scarring and they will have to do some type of breast augmentation. Dr. Dubrow tells him “If I were you I would go home and think about it because you aren’t in any danger. Also don’t make anymore bets on your body because you are getting older and it could lead to unnecessary surgery.” Brian says “I appreciate what Dr. Dubrow said, but I can’t guarantee that I won’t make anymore bets on my body.”

Dr. Nassiff is doing Kearra’s lip surgery. When he cuts her open he can’t see any clearly defined masses and suspects that the silicone went away and the body began to turn on itself. He says “I am going to do my best, but there is no way that I can make her lips totally symmetrical.” After working on her for awhile he steps back and takes an internal picture. He is happy with the way that they look and says “I think Kierra will have normal sized lips and be very happy when the swelling goes down.”

On Jessica’s first check in Dr. Dubrow tells her “When I did the liposuction we found a hernia and I had to remove that so you had an extra surgery that I had no choice but to do.” They check her out and everything is healing nicely. They change the dressing and Jessica is so excited when they tell her that she can have a normal recovery.

Kierra is checking in on her first day after surgery. Dr. Nassiff tells her “We didn’t find any large pockets of silicone. Instead we found granuloma’s that we cut down equally. You still have some swelling, but that’s normal.” He also tells her “I am cautiously optimistic because the granuloma can come back at any time so we have to be aware of that.” He hands Jessica a mirror so that she can look at her lips. Jessica and her mother are both very pleased. Jessica says “I am so happy that I don’t have to feel ashamed anymore.”

Jessica is excited to show off her new body to her husband Marcus. She walks in and asks him “What do you think?” He tells her “You look beautiful.” She tells him “This is one of those dresses that had been hiding in the closet for three years.” Marcus tells her “Now I hope you can see you the way I see you.” Jessica asks him “How do you see me?” He tells her “You were perfect.” Jessica tells him “Don’t make me cry.”

Kierra is also happy with her surgery. She says “When we moved to San Francisco my world became much smaller. Thanks to Dr. Debrow I can go out and make friends without feeling self conscious. I had very few friends and interviewing for a job was nerve wrecking.” She meets up with her husband Ryan and her daughter Lennox. Ryan tells her “You look perfect.” Kierra says “I have no excuse not to meet new people and make new friends.” She also says “I have no way to thank Dr. Nassiff. My lips are perfect and I can finally close my mouth.”