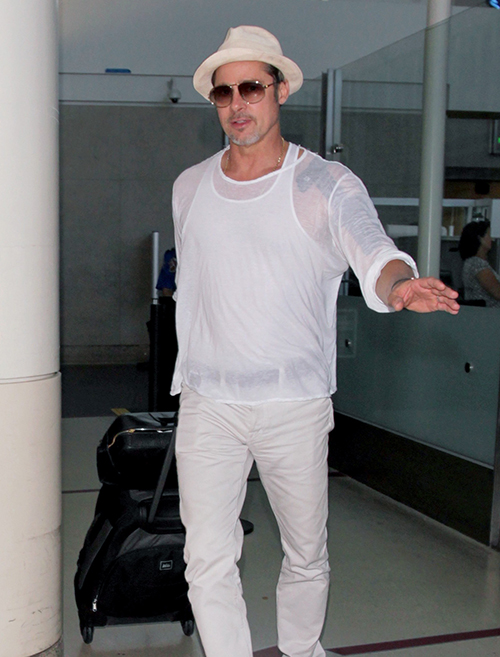 Brad Pitt and Angelina Jolie have long been considered Hollywood’s golden couple. So, of course, the stars are feeling pressured to keep up with their good looks as they age. And while they’ve been doing everything they can to maintain their youthful looks, there’s a chance that they might also be destroying their faces with their new botox addiction.

According to the National Enquirer, one source said, “They’re both terrified of aging, but they’re looking totally plastic right now after having a series of freshen-ups with their dermatologist. It’s taken 10 years off them! Brad’s always been a fan of Radiesse wrinkle filler while Angie’s hooked on laser resurfacing — which is why her skin looks so taut and translucent, and her facial dermis is very thin. Brad’s also been experimenting with various tanning creams, which have also given him a more youthful look. They’re both big fans of Botox or Dysport injections.”

During Hollywood awards season earlier this year, many viewers couldn’t help but notice that Brad Pitt’s face looked rather youthful, if not completely different, during his appearance at the Golden Globes back in January. And even though she juggles motherhood with six kids and her very demanding Hollywood career, Angelina Jolie has also managed to look flawless each and every time she steps out with her family. So it’s no wonder that the couple is allegedly hooked on looking as good as possible as their routines – which possibly includes the usual Hollywood nip and tuck here and there – is definitely working.

In an industry where image is everything, it shouldn’t come as a surprise that Brad Pitt and Angelina Jolie are afraid of aging. After all, Angelina Jolie has not had a hit movie in years and with all the competition in Hollywood these days, she knows she has to keep up with the younger crowd in order to get work. The same of course applies to Brad Pitt. He has long been Hollywood’s golden boy and is known more for his heartthrob looks than his talents on the big screen.

Tell us CDL readers, do you think Brad Pitt and Angelina Jolie’s plastic surgery rumors are true? Is the couple worried about aging and losing out on Hollywood roles to young actors in the industry? Drop us a line with your thoughts in our comments section.