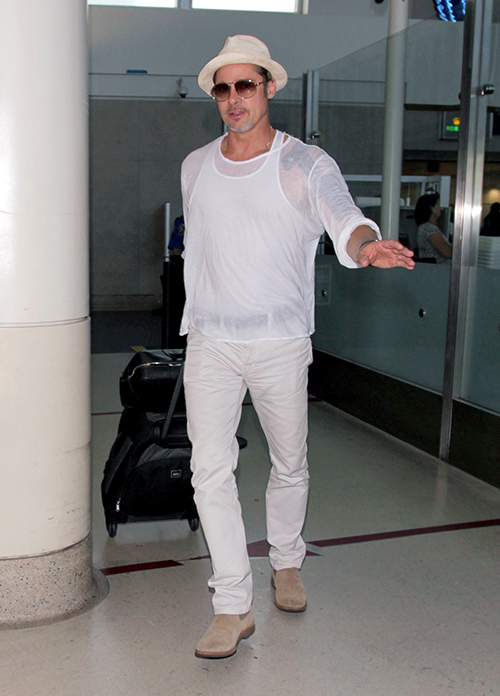 Is Brad Pitt and Angelina Jolie’s marriage headed towards a divorce? Is there trouble in paradise for Brangelina? That’s what the new reports seem to be suggesting as Brad Pitt has often been spotted traveling solo this summer, without his wife Angelina Jolie and their six children by his side.

Brad Pitt and Angelina Jolie’s family always travels by their side, no matter where they go. In fact, it’s also the reason why Brangelina’s kids – their adopted children Maddox, 15, Pax, 12, and Zahara, 11, along with their biological kids, Shiloh, 10, and twins Knox and Vivienne, 8 – are not enrolled in a traditional school because their mother insists that they see the world while they are still young.

Yet, the globetrotting family has not been seen together in months, leading both fans and critics to believe that there might be something going on behind closed doors for Brad Pitt and Angelina Jolie’s marriage.

Of course, it doesn’t help that Jennifer Aniston tears over all the heartache she’s endured in her life has fans suspecting that she still hasn’t gotten over her Brad Pitt divorce. It’s been well over ten years since Jennifer Aniston and Brad Pitts’ marriage ended, yet the media still can’t help but label the Hollywood actor as the one “who got away.”

The two will always be remembered as Hollywood’s first golden couple of their generation. Could this be the reason why Brad Pitt and Angelina Jolie are no longer seen with each other? Is the ‘Maleficent’ actress upset over reports that Jennifer Aniston misses her ex-husband?

What’s more, sources close to the couple say that a Brad Pitt and Angelina Jolie divorce almost happened but the one thing that saved them was their family. One source dished, “Even though Brad and Angelina have come to a place of great understanding, they still have a long way to go to overcome their many problems. They’ve taken a very positive step toward a future together and making their marriage better, but there’s still a lot to work through.”

And now that Brad Pitt and Angelina Jolie divorce reports are making headlines, it will only be a matter of time before Brangelina appear in a very special photo op together. After all, if there’s one thing that Angelina Jolie protects more than her marriage, it’s her public image. Unlike Jennifer Aniston, she would never let anyone see her cry in public. Right, CDL readers?