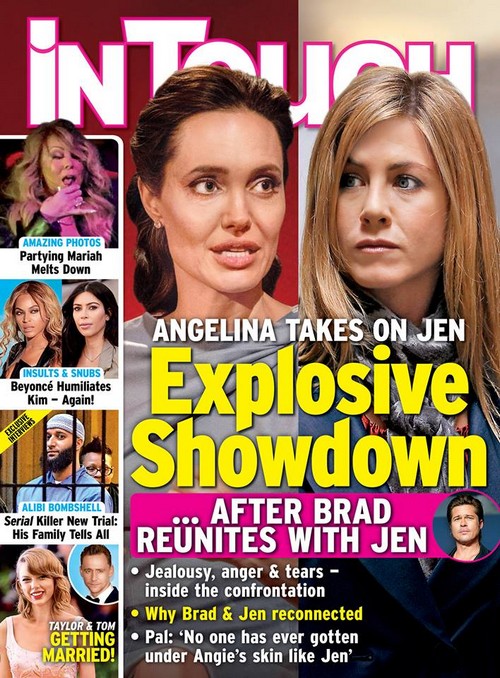 The neverending battle between Angelina Jolie and Jennifer Aniston rages on. You would think that by now, over a decade later, the beef between Angie and Jen over Brad Pitt would have died down – especially now that Aniston is married to her new husband Justin Theroux, but according to In Touch Magazine that is not the case.

This week’s cover of In Touch Magazine features a photo of Angelina Jolie and Jennifer Aniston, long time enemies, the headline reads: “Angelina Takes On Jen – Explosive Showdown – After Brad Reunites With Jen.” The cover goes on to tease that there was “Jealousy, anger and tears in side the explosive showdown.”

Recently Jennifer Aniston’s mother sadly passed away, even though Jen has her own husband Justin Theroux’s should to cry on, Brad Pitt apparently reached out to his ex-wife to offer his condolences. Of course, according to In Touch Magazine, when Angelina Jolie learned that Brad had spoke to Aniston, she freaked.

An inside source dished to In Touch Magazine, “She accused him of talking with Jen behind her back. She was furious they’d reunited. She went ballistic and was in tears. Angie’s greatest fear is that in a classic case of what goes around comes around, Brad could someone how end up back in Jen’s arms.”

Apparently Angelina has heard those rumors about Jen and Justin’s marriage being on the rocks, so she decided she wanted to have a meeting with Aniston to make it very clear that Brad Pitt is “her man.” As for the supposed “sit-down” Angelina is planning, In Touch doesn’t go in to detail about whether or not it has actually happened, but I think we can all agree that it never will.

It will be a cold day in hell before Jennifer Aniston and Angelina Jolie sit down at the same table.

Jennifer Aniston and Angelina Jolie are never going to be friends, the odds of them even speaking to each other are slim to none. But, it’s probably about time the media let this neverending feud die – because honestly Jolie and Aniston probably forgot about it years ago.

What do you guys think? Are Angelina Jolie and Jennifer Aniston still fighting? Or could the two women care less? Share your thoughts in the comments below and let us know what you think!