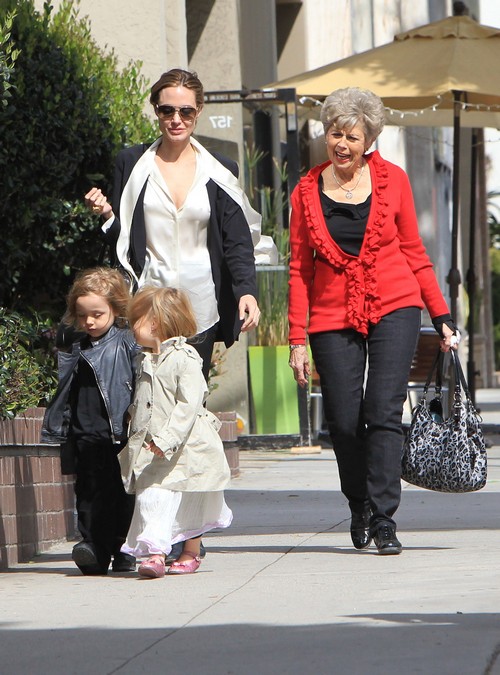 Brad Pitt and Angelina Jolie’s divorce news shocked fans this week and nearly broke the Internet, but it also horrified Jane Etta Pitt, Brad’s mother. But, if you have been following the couple over the course of the last few years, then you are most likely well aware of the fact that their marriage was no fairytale. It’s safe to assume that Brad Pitt is livid with his soon to be ex-wife right now, and the fact that she is going after their six children, but Brad Pitt’s over-protective mother Jane Etta Pitt is probably even more upset than he is.

Brad Pitt is very close with his family, especially his sweet mother Jane. Although things were rocky at the beginning of his and Angelina’s relationship, Jane Pitt eventually accepted Angelina, doted on her grandchildren, and even tried to help save Brad and Angelina’s marriage last year. A source close to the couple dished to In Touch Magazine that Jane invited the Jolie-Pitt clan to her home for a little intervention, because she knew their marriage was in trouble then.

Not only did Angelina obviously not take Jane’s advice to heart, but that coupled with the hurtful things she allegedly stated about Brad Pitt in divorce documents was a total slap in the face to the Pitt Family. Brad’s brother Doug Pitt, who also serves as the family’s unofficial spokesperson was clearly unhappy with the news. When Pitt’s local newspaper contacted him in regards to the divorce announcement, Doug stated he was “Not feeling this” and would get back to them tomorrow.

One thing is for sure, even if Brad and Angie do manage to work things out, the Pitt Family won’t be offering Angelina an olive branch any time soon. Brad may forgive her, but his mother and siblings most likely won’t.

Are you shocked by the nasty turn of events that occurred this week surrounding Brad Pitt and Angelina Jolie’s divorce? Let us know what you think in the comments below!

What’s your favorite thing about Angelina?