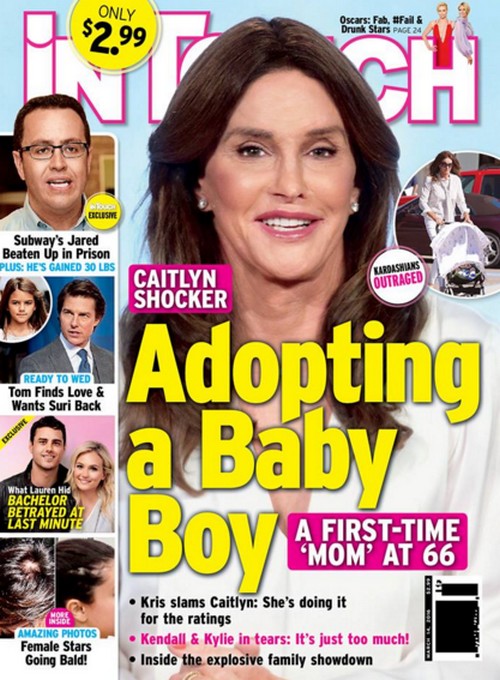 Caitlyn Jenner is going to be a mom and adopt a baby boy! Caitlyn, formerly known as Bruce Jenner, was the father to several kids – his kids from a previous marriage before he met Kris Jenner, his step-children the Kardashians, and his two you youngest Kylie and Kendall Jenner. But, since her transition she wants to know what it is like to be a mother – and is exploring adoption options.

This week’s edition of In Touch Magazine features Caitlyn Jenner on the cover and the headline reads, “Caitlyn Shocker: Adopting A Baby Boy – Going To Be A First Time Mother At Age 66.” Of course, the cover of the magazine goes on to tease that Kris Jenner and the Kardashians are furious.

Caitlyn has her own E! reality show, “I Am Cait,” and she and the Kardashians are constantly fighting over family events for their shows – and of course competing in the ratings department.

According to In Touch Magazine, Kris Jenner thinks that Caitlyn is trying to adopt a baby boy for ratings for her reality show. Isn’t that the pot calling the kettle black? We’re pretty sure Kris Jenner has done FAR worse things for ratings – like for example sell her daughter’s sex tape.

Of course the Kardashians are upset about Cait’s latest publicity scam and possible addition to the family – but only because they didn’t think of it first. The magazine goes on to tease that Caitlyn and the Kardashians had a “Explosive Family Showdown” over her adoption plans, and Kendall and Kylie left sobbing.

Honestly, we’re not getting too worked up about it – we don’t really see too many adoption agencies wiling to working with someone who is 66 years old, when the child turns 18 – Caitlyn will be nearly 100 years old.

But, money talks in those situations and if Caitlyn Jenner really wanted a baby, we’re sure she could buy one. Would she really go through with it though? Or is this all just a rouse for attention? Let us know what you think in the comments below!