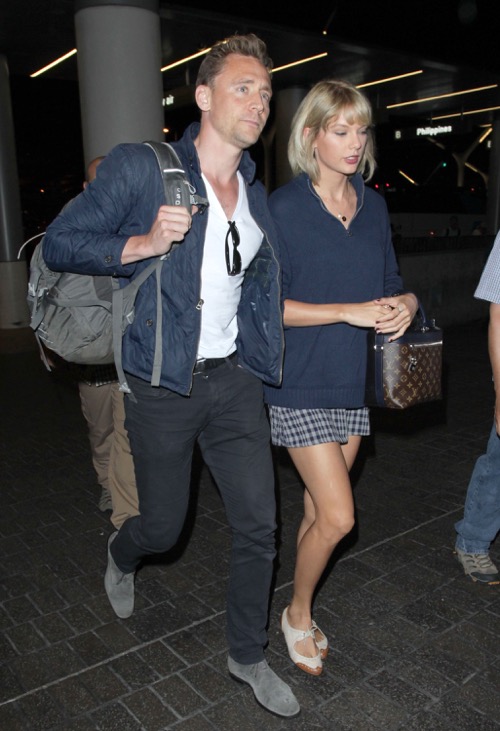 It looks like Calvin Harris might have beaten Taylor Swift at her own game by implying that Taylor cheated with Tom Hiddleston in a new song parody. While the ‘Bad Blood’ singer usually writes songs about her relationships with her ex-boyfriends after they break-up, apparently Calvin Harris beat her to the punch as he just released his ‘Taylor Swift diss track,’ ‘Ole’ with John Newman.

According to TMZ, there was even speculation earlier in the summer that Calvin Harris’ ‘Ole’ track was written using her current boyfriend Tom Hiddleston’s point-of-view in their supposed love triangle. Although it was never confirmed, Calvin Harris hinted that Taylor Swift might have cheated on him with Tom Hiddleston before they ultimately broke up several weeks ago.

If that weren’t enough, many lyrics to ‘Ole’ include, “I see online that you begun to be a good girl and take trips with your boyfriend. Being attentive, continue to pretend,” along with, “You’ve hidden my name in your phone so you can call me to tell me you’ve been going through hell. Left him alone and you booked in a hotel.” Now, Calvin Harris is apparently trolling Tom Hiddleston even more by mocking him in the music video.

Apparently, both Calvin Harris and John Newman can be seen sitting on rocks the same way Taylor Swift and Tom Hiddleston debuted their relationship at a Rhode Island beach in early June. Apparently, Calvin Harris was left blindsided by Taylor Swift and Tom Hiddleston’s romance mostly because the chart topper broke up with him only a few days before she came out in public with her new boyfriend.

Of course, Calvin Harris has not commented on any of the speculation, but there’s no doubt that he is using his new music video to troll Taylor Swift and Tom Hiddleston. He’s been left so humiliated by Taylor Swift that he’s apparently willing to do anything to get back at her, even if that means mocking her new boyfriend.

Sure, Taylor Swift might have done him wrong by dumping him over the phone and moving on so quickly with a new man while leaving him brokenhearted. But knowing how Taylor Swift is a mastermind when it comes to manipulating the media, it will only be a matter of time before she retaliates with a message of her own. And that’s when she’ll have a laugh of her own.

Tell us CDL readers, do you think Calvin Harris ‘trolled’ Taylor Swift and Tom Hiddleston with his new music video? What do you think of the new song? Drop us a line in our comments section below.