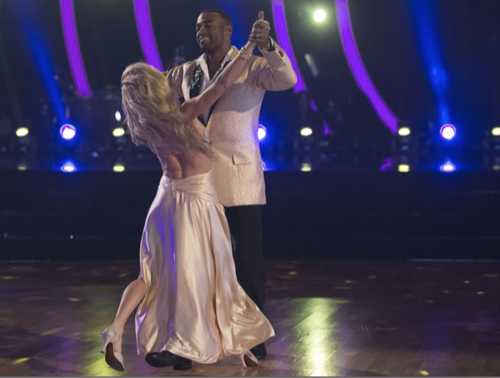 Tonight on ABC the glitz and the glamour returns to the ballroom as Dancing With The Stars returns for the fifth episode of the 23rd season. Former American football wide receiver Calvin Johnson Jr. & his professional dancer Lindsay Arnold took the stage tonight and danced the Argentine Tango for their Latin night dance to “Hotel California” by Eagles. Did you watch tonight’s DWTS episode? If you missed it we have a full and detailed recap, right here for you. Did you miss any of tonight’s performance videos? If you did we have them all, right here for you!

Carrie Ann: Wow, 23 seasons and I have never seen lifts like that, ever. You owned tht dance and Lindsay was dancing her heart out. There was this like magnetic intensity and it was so sexy. You don’t have to give us selfie face, just give us Calvin.

Pitbull: It’s a shame that you aren’t playing football anymore because you could have used some of those moods out there on the field. Everyone would have broke a bunch of ankles, good job!

Julianne: I am so happy because since day one I have said that there is something about you since day one. I don’t know what it is about guys, but when they hear a critique they want it so much more. That was amazing, oh and point your tones!

Bruno: Calvin, you were smoldering tonight, you were in the zone. I would like to point out, that you were leading every moment of the dance like the man. And those lifts, you were spinning her like a wheel, the girl is going to wind up at the chiropractor!

Watch the video below and let us know what you think, do you agree with the judge’s comments? Do you think Calvin did enough to avoid elimination tomorrow? Make sure to head over and check out all our DWTS recaps, spoilers, news & more, right here.

Turning up their sexy for the week