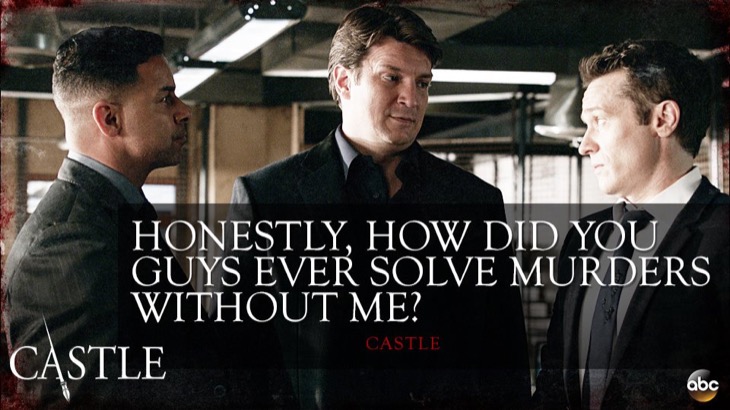 Tonight on ABC Castle starring Nathan Fillion continues with an all new Monday February 14, season 8 episode 10 called “Witness for the Prosecution” and we have your weekly recap below. On tonight’s episode Castle (Nathan Fillion) takes the stand as the key witness in a murder trial, but then new info emerges late in the case, leading him and Beckett (Stana Katic) to rush to prevent a miscarriage of justice.

On the last episode, when a body was found in the theater of Martha’s latest show, Castle and Beckett’s investigation lead them into the unexpectedly dangerous world of competitive a capella. Did you watch the last episode? If you missed it, we have a full and detailed recap right here for you.

On tonight’s episode as per ABC’s synopsis, “Castle finally gets his day in court when he takes the stand as the key witness to a murder from five months ago. But when new information suddenly arises, he and Beckett must race against the clock to prevent a miscarriage of justice.”

Tonight’s episode is going to be great so be sure to tune in to CASTLE on ABC at 10PM EST. We’ll be blogging all the action, be sure to hit up the comments and tell us how excited you are for season 8 episode 9. While you wait for the recap, check out a sneak peek of tonight’s episode below!

Richard Castle finally got the chance to see what an actual trial looked like on tonight’s episode of “Castle”.

Castle had apparently attended a reading at Mr. and Mrs. Master’s home after Johanna Masters had put a bid on it at an earlier charity function. Johanna it seems had been one of Castle’s biggest fans and she had honestly enjoyed meeting him in person because as we know he can be quite charming. But, once Castle had finished up the reading and was in need of the facilities, he had gone upstairs to use the bathroom and had found Nina O’Keefe standing over Sadie Beakman’s body.

Nina had been part of the wait staff at the reading and she also had a history of using her positions in wealthy homes to her advantage like home burglaries for instance. And therefore, Nina’s trial should have been a slam-dunk for ADA Welller.

He had the murder weapon, a weak opposing counsel, and more importantly he had an eye-witness. Castle had seen Nina pull a fireplace poker out of the victim and he agreed to testify to the fact Nina had then fled the scene by climbing out of the second story window. So Weller had thought he had everything he needed.

However, something changed. Sadie was supposed to have Stan Novak as her defense attorney and at the last minute Stan’s wife had gone into premature labor. Thus a replacement had to be found for Stan and unfortunately Caleb Brown had gotten the case.

Caleb had been someone that Beckett and her partner have been looking into as part of their secret investigation on the side. And she had in fact been looking for one of his weakness as well when he had gotten aside to Nina’s case. Though it should be noted that Mr. Brown’s skills as an attorney just happens to be one of his strengths.

Caleb had gone on to annihilate Castle’s testimony on the stand and somehow the ADA allowed him to badger Castle into changing his testimony until Castle admitted that there could be a possibility that Nina hadn’t killed Sadie. So that had put the entire trial in jeopardy because the ADA didn’t have to much go on without Castle and what he had wasn’t enough to keep Nina in prison. Therefore, both Castle and Beckett swore to Weller that they would find him more evidence.

And to that end, they kept their promises. Beckett and Castle had pulled their resources and they had across footage from outside a nightclub that showed Nina and her victim Sadie kissing. Apparently the two had been lesbian lovers and so the footage was able to provide the ADA a motive.

But neither Beckett nor Castle to end their investigation there. Castle and Ryan had later gone back to the Masters’ townhouse and they were doing a walkthrough when something stood out for Castle. He saw that the Masters had moved their basketball hoop to the other side of their yard and had commented about it. So Ryan had told the Masters “good thinking”. He said burglars could have broken in if the hoop had still been near the window.

And yet Johanna Masters told the guys that the basketball hoop had always been on the other side of the yard.

The couple had noticed that someone had moved the hoop the day after Sadie’s murder but that hadn’t made sense to Castle. The only reason someone would move the hoop to be near the window was if they wanted to either break-in or make a hasty escape. And therefore, Castle began to believe that maybe Nina hadn’t killed

Although the only way he would truly know was if he spoke to Nina. So Castle had gone on to do something pretty crazy. He purposely insulted the judge on the case until eventually she had him thrown into jail for contempt. Where he was then able to get some face time with Nina without anyone knowing.

Castle it seems had wanted to know why Nina had fought with Sadie outside of the club and he got her to him by admitting he had some doubts about her guilt.

So Nina had been quick in defending herself. She told Castle that Sadie had gotten her and her catering company that job at the Masters because Sadie had wanted her to steal Roger Masters’s champagne glass. And that she hadn’t wanted to lose her job.

However, there weren’t that many reasons for why Sadie would steal her cameraman’s. She either need Roger’s DNA or his fingerprints. And it turns out she wouldn’t have needed his DNA for a potential paternity suite seeing as Roger has always been quite vocal about his infertility.

And therefore Sadie needed his fingerprints. Roger had safe in the upstairs office and he ended up opening it for the cops because his wife had blackmailed into cooperating with her idol Richard Castle. So the detectives finally figured out what Sadie had been doing that night.

She had been trying to get footage that Roger had shot of her stealing millions of dollars out of Iraq. Apparently they had come across a treasure trove and Sadie had said that neither of them should take the money but then stole for herself when Roger’s back was turned. Thus Roger had looked pretty good for murder seeing as Sadie had cut him out of a good deal.

Yet Roger actually had alibi for that night and he had hidden it because he hadn’t wanted his wife to know that he had been smoking pot in the basement with his friends.

He told the cops that he had promised to cut back and that Johanna wouldn’t like it if she found out he had been lying. And after they verified his story, Roger had been cleared of Sadie’s death. But it was pure luck that Castle remembered something from the night of the party.

He remembered that someone had been in the downstairs bathroom and that’s why he had gone upstairs. And that the man who had come out of the bathroom had dirt on his shoes as if he had just been running through the yard. So all this time, Castle knew who the real killer was.

It had been Sadie’s husband!

Sadie had been known for her many affairs and her husband had seen her go upstairs so he thought she was meeting someone. And he had dragged the basketball hoop across the yard in order to get a better look. But his wife had caught him spying on her and the two had gotten into a heated argument that resulted in Sadie’s death.

So Nina had gone free at the end of the day but Beckett still plans on taking down Caleb Brown despite some of his redeeming qualities. Like being a good a defense attorney.