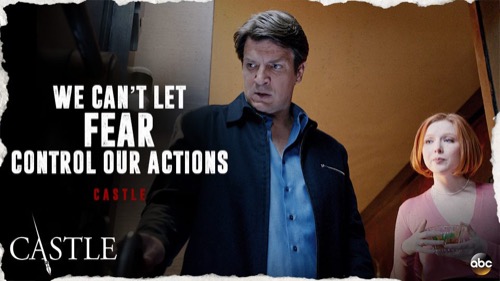 Tonight on ABC Castle starring Nathan Fillion continues with an all new Monday May 9, season 8 episode 21 called “Hell to Pay” and we have your weekly recap below. On tonight’s episode a psychiatric inmate escapes and drops dead in Castle’s (Nathan Fillion) PI office.

On the last episode after a movie star turned theater actor was mysteriously killed, Castle and Beckett went backstage and learned the star had more to worry about than just his lines. Did you watch the last episode? If you missed it, we have a full and detailed recap right here for you.

On tonight’s episode as per ABC’s synopsis, “a psychiatric inmate escapes and drops dead in Castle’s PI office, and the investigation that follows has Castle surmising the Antichrist could be involved.”

Tonight’s episode is going to be great so be sure to tune in to CASTLE on ABC at 10PM EST. We’ll be blogging all the action, be sure to hit up the comments and tell us how excited you are for season 8 episode 21.

Tonight’s episode of Castle kicks off in the middle of a late night thunderstorm. Hayley and Alexis are stranded at the office in the storm, the electricity is out, they decide to drink Castle’s scotch and wait it out. Meanwhile, there’s a man dragging a bloody axe down the hallway. He smashes the office door and strolls inside. Hayley and Alex freak out, and Alexis grabs a gun from Castle’s desk. Before she can shoot the intruder, he grumbles “Finnis omnium nunc est.” Then, he drops dead on Castle’s office floor.

Castle and Kate are at home – Castle is thrilled that the city is having a blackout, he says that he and Kate can play naked Twister. They get an alert from Alexis and realize something is wrong – they rush to the office. Lanie arrives on the scene, he says that the victim was stabbed about an hour ago and blead to death. He is also wearing a hospital bracelet, his name is G. Shaw. Kate looks at the hospital bracelet and realizes it is actually from a psychiatric hospital – he’s an escaped mental patient.

Castle, Espinoza, and Ryan head to the mental hospital. They meet with Dr. Brock Martin – he says Gabriel Shaw has been living there for 20 years. Dr. Brock explain that 20 years ago Gabriel was locked up because he broke in to a man’s house with an axe and tried to kill his whole family. Gabriel was convinced that he was on a mission from God and ridding the world of evil.

Dr. Brock says that he sent orderlies out to look for Gabriel after they realized that he had stolen a keycard. One of the orderlies hasn’t returned yet – his name is Dave Holmby. They snoop around Gabriel’s room, Castle finds a bible hidden in the vent full of Gabriel’s drawings. Lanie calls them and tells them to get to the morgue – she found something disturbing.

Gabriel’s entire body is covered in Bible verses and Latin, written on him with red ink. Lanie called the mental hospital and they swear that when Gabriel escaped, he didn’t have any writing on him. It gets weird, Gabriel’s stab wound was from some sort of claw or talon and there is sulfur in the wound. Castle is convinced he was killed by a demon…

Esposito and Ryan track down Dave Holmby. He confesses that he saw Gabriel during the storm and he tried to put him in his car. But, Gabriel threatened to tell Dr. Brock that Dave was selling patients’ meds, so he let him go. Dave says that a few days ago Gabriel had a visit at the hospital – someone came to see him and got him all riled up.

Meanwhile, Hayley and Alexis are pulling the case files on the Crowne family. It turns out that Gabriel’s attack wasn’t random at all. He was actually hired by a private investigator named Noah Kramer to investigate the Crowne’s as a spiritual consultant. 20 years ago, Noah Kramer’s office is where Castle’s office is now, that’s why Gabriel showed up with the axe…he was looking for Kramer.

At the police station, Ryan is sorting through photos from the crime scene. Castle is freaked out when he notices all of the photos of him have a light glare on his face. Hayley and Alexis call Castle and fill him in on Gabriel and Noah Kramer. Castle pays Noah’s family a visit – he died years ago. Noah’s wife says Gabriel stopped by their house yesterday, he wanted something from Noah’s office, but she told him it was all long gone. She says that they hate Gabriel because he ruined her husband’s reputation as a PI.

Castle rushes back to his office – he knows what Gabriel was after. When he moved in to the office, the contractors found a safe in the wall that had been walled over. Castle left it there – but he never opened the safe to see what was inside. Hayley agrees to get to work on cracking the safe.

Esposito pulls security footage from the mental hospital, he is trying to figure out who was visiting Gabriel but they used a fake name. In the security video footage – the visitor’s face is blurred out. Esposito tells Kate he thinks Castle may have been right about the demons.

Meanwhile in Castle’s office, Hayley cracks the safe – but it’s not just a safe, it turns out to be the door to a secret room full of cobwebs, creepy religious statues, and hundreds of photos of people. According to the writing on the wall, the Latin phrase Gabriel kept repeating translated to “the end of days” and the end of days is less than 2 days away…

Castle calls in Ryan and Esposito to check out the room. Ryan says that the pictures on the wall are of the Crowne Family – Loren and Alice, and their son Victor. Ryan says that they survived Gabriel’s attack – and then a month later Victor’s parents were all killed in a freak skiing accident. Ironically, in 2 days Victor will turn 30 years old and inherit his parents billions of dollars.

Castle is convinced that Gabriel thought that Victor was the Antichrist and that is why he tried to kill him when he was just a kid. They think that Gabriel may have gone after Victor to finish the job last night. Castle, Ryan, and Esposito pay Victor a visit – he is thrilled that Gabriel is dead, but he insists that he had nothing to do with it.

Crowne explains that he is working on a purified water flitration system, his company will break ground in 2 days on his 30th birthday. Castle smells sulfur, Crowne says that they had an accident yesterday with the water filters – he is “still working out some of the kinks.”

Before they leave the office, Ryan checks the security footage to make sure that Crowne was at the office all night. While they are looking at the security monitors, Castle has the same bright flash of light on him as he did in the crime scene photos. He freaks out, he’s convinced that he has been marked for death.

Lanie calls from the morgue – she got the test results back on the weird ink that was written all over Gabriel’s body. It was made up of olive oil, Cassia, Cinnamon, Cymbopogon, and Myrrh. Castle recognizes the ingredients, he rushes back to the safe. Someone named Karl Von Eckland wrote a letter to Gabriel about those ingredients and said that he would anoint him and prepare him for spiritual battle.

They head to Karl’s apartment, but he died in 1996, and his son Oscar still lives there. Oscar says that his dad was crazy and it was all religious mumbo jumbo. But, Gabriel paid him $50 to prepare him for battle. Oscar says he just wrote some random Bible verses on him, and he was happy, and left.

They pull the security footage from Oscar’s apartment, it’s grainy and full of glitches from the storm, but it shows Gabriel heading to a loading dock. Castle is certain that he sees a demon in the glitch, Kate tells him that he is losing his mind.

Castle heads home and is up late at night to mull over the evidence, he is still convinced that Victor Crown is a demon and Gabriel was trying to kill him. Kate makes fun of Castle and sneaks up behind and scares him, then tells him to come to bed. Castle can’t though. He gets back on his computer and Googles “How to kill a demon.” He recognizes one of the weapons in the search results called the Angel Dagger, he rushes back to the office and finds the blade in the safe.

Castle calls Kate at home, he tells her that he found the “Angel Dagger” – that’s what Gabriel broke in for, he needed the dagger to kill Crowne. While they are talking, someone arrives at the office and turns off the lights and slams the safe door closed. Castle whispers to Kate that someone is there with him.

Kate finds Castle knocked out in the safe and the Angel Dagger is missing – he swears that he just saw the devil. Ryan and Esposito pull the security footage from Castle’s office’s parking lot and see a silver SUV that was registered to Noah Kramer’s wife. They bring her in for questioning and she sobs and confesses that she stabbed Gabriel with her garden claw – that explains the claw shaped wound. But, she swears she wasn’t at Castle’s office.

Meanwhile, Ryan cleans up the security video from the mental hospital and learns that the man that visited Gabriel was Oscar all along. He played them..he really does believe in his father’s religious stuff, and he is finishing the job for him. Karl and Gabriel both failed at killing Crowne, who they are convinced is the Antichist. Oscar must have broke in to the safe and stole the Angel Dagger so that he could kill Victor Crowne.

The police rush to Victor Crowne’s office – Oscar beat them there, he lied and said that he was a notorary. They head down to the construction site in the basement – Castle can hear Crowne screaming. Oscar has him tied down to a table and his preparing to stab him. Oscar starts spewing craziness and says that Crowne is a demon, Castle tackles Oscar and gets the Angel Dagger away from him. Oscar stumbles in to a pile of lead pipes, they fall on top of him and knock Oscar out.

Ryan and Esposito finally arrive – Castle unties Crowne. Crowne tells Castle that he owes him one and Castle jokes he literally just made a deal with the devil.

Back at the police station, Kate explains to Castle that the whole time that he has been taking photos of himself – he had a zipper on his front pocket, and it was catching the light. Castle is thrilled – this means that he isn’t marked for death after all. Castle and Kate head to the office, they play a prank on Hayley and Alexis and convince them that the office is haunted.