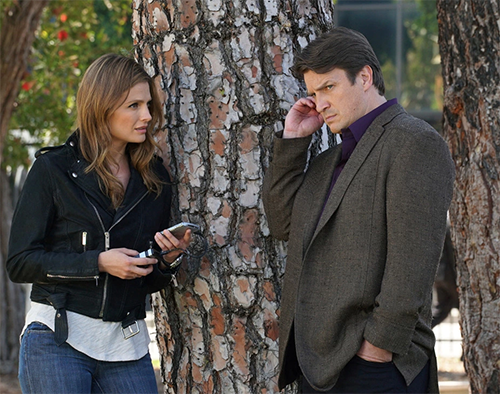 The Castle Season 8 Finale “Crossfire” will air Monday, May 16. With Stana Katic ousted, fans expect Kate Beckett to die. If Season 9 goes off, it’s anticipated to pick up way down the road and some Castle spoilers tease that Hayley Shipton (Toks Olagundoye) may take Kate’s place in Castle’s (Nathan Fillion) life and heart.

We’re waiting on official word if Castle got renewed for Season 9, but Nathan Fillion seems optimistic. Plus, the Castle finale was made with two endings filmed just in case. Both would likely see Kate Beckett killed but the alternate ending was written to give closure to the series and give fans a satisfactory ending.

By all indications, though, Castle Season 9 is going off and that means Nathan Fillion’s character needs a new love interest and Hayley may have been brought in for just that purpose. The finale will see Castle and Kate pursuing LokSat and the culmination of their investigation leaves them both in danger.

Executive producer Alexi Hawley says of the finale episode, “Their [Kate and Castle] lives are in jeopardy pretty much from the jump… Things get dangerous very fast.” Some speculate that once we see Kate Beckett killed, the plot of Season 9 might be Castle pursuing her killer.

Showrunners have said that with the end of Castle Season 8 (and assuming we’ll see Kate Beckett dead), all of the series-long mysteries will wrap up, which allows Castle Season 9 to start from ground zero almost like a new show – but without Stana Katic.

In addition to Castle Season 8 finale seeing Kate Beckett dead, Lanie Parish (Tamala Jones) is also exiting. This will shake things up and could leave the show a real boys club with Nathan Fillion, Seamus Dever (Ryan), and Jon Huerta (Javier) together, possibly with Toks Olagundoye the center of attention.

Toks and Nathan Fillion have good chemistry so a Rick Castle-Hayley Shipton pairing might be just the thing to kick Season 9 off with a bang – particularly with a time leap that allows Castle to grieve Kate’s passing so it doesn’t seem forced.

Tapping into Hayley’s sexy Scotland Yard swagger is a perfect way to reboot the series without alienating female fans by keeping a strong woman front and center alongside Castle. Plus, Nathan Fillion is at his best when he’s flirty and fun – so this seems like a good way to jump into Season 9.

There’s just one episode left before the Season 8 finale. “Hell to Pay” will air Monday, May 9 and should set the stage for the fatal finale on Monday, May 16 “Crossfire.” What do you think, Castle watchers? Do you hope to see Castle renewed? Will you watch without Stana Katic?

Share your comments below and come back to CDL often for more Castle finale spoilers and news on the cast controversy behind the scenes on the ABC show.