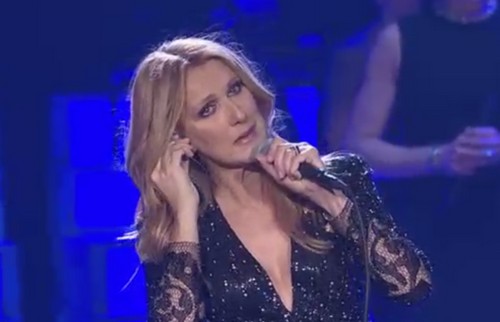 Celine Dion’s first concert since Rene Angelil’s death was a tribute to the man who was the maestro of Celine’s career. The iconic singer shared 20 minutes of the Coliseum concert via her website on Tuesday, February 23.

The packed house cheered as the theater darkened and Celine’s tribute to Rene began with a collection of photos and a statement from Dion playing against a black screen.

“I understood that my career was in a way his masterpiece, his song, his symphony. The idea of leaving it unfinished would have hurt him terribly. I realized that if he ever left us, I would have to continue without him, for him.”

Vintage and perhaps never- before-seen photos and video played across the screen. These photographs included a baby picture of Rene, pictures of the Angelil family throughout the years and a short clip of Celine and Rene’s wedding.

Other photos memorialize Rene wearing a Quebec Nordiques jersey with his name on the back and the number one. The next photograph shows Angelil holding the Stanley Cup and smiling.

In other video Rene is shown beaming and cradling newborn son Rene-Charles. In yet another video shared by Celine in the tribute the couple is at the hospital awaiting the birth of twin boys Eddy and Nelson.

The montage ended with a video of Celine and Rene signing “I love you” and then the concert began. Celine stepped out onto the stage after the curtains had parted.

Wearing a beautiful black gown with glittering stars, Dion stood alone while being given a standing ovation from the crowd. Celine sang “With One More Look at You.”

Celine Dion and Rene Angelil’s life together was one of the greatest love stories of all time. The “My Heart Will Go On” singer revealed to the crowd, “He always made me feel that we were on our first date, isn’t that amazing?” Dion also shared, “He never told me what I wanted to hear, he told me what I needed to hear.”

Rene Angelil died on January 14 after years of battling throat cancer. The music mogul was laid to rest after state funeral in Montreal, Quebec. An emotional “Celebration of Life” was held in Las Vegas at the Coliseum on February 3.

Though obviously heartbroken, Dion explained that though Angelil is “no longer physically with me, he is even more present. We were one, and nothing has changed. We will always be one.” Celine thanked everyone and sang “Where Does My Heart Beat Now” as video of Celine Dion singing throughout the years played across screens on the stage.