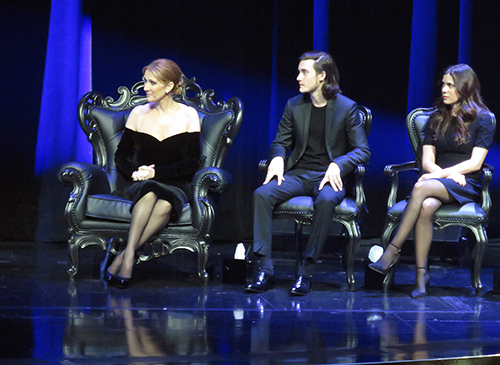 Celine Dion has begun Las Vegas rehearsals after burying René Angélil and brother Daniel Dion. They died within days of each other in January 2016. René and Daniel were both in a battle with terminal cancer for years.

Angélil died on January 14, two days before Celine’s brother, Daniel Dion, also passed away from cancer-related complications. It would have been completely understandable if Celine took a longer hiatus from performing. However, Celine is clearly not one to be wallowing in depression and is ready for the road a month after their deaths.

The 47-year-old Canadian songstress is to resume her residency at Caesars Palace with the first of a series of shows slated to begin on February 23. Celine Dion is one of several iconic performers in the music industry confirmed for the Caesars Palace show calendar for the entire month. The Daily Mail reports that Celine has already begun rehearsals for the show and is doing this under the management of Aldo Giampalo. While this might appear sudden, for the pass 25 years Aldo Giampaolo has been a close adviser working with René. He obviously has what it takes to manage the great Celine.

René and Celine, who have three children together, celebrated 21 years of marriage in December 2015. In a tribute to her late husband at Caesars Palace on February 3, Celine reminisced that he protected her since he discovered her as a 12 year old. She attributes all the successes of her career to his foresight and belief in her talent.

As stated by The Closer Weekly, Celine had postponed her performances at Caesars Palace and cancelled a tour in September 2015 to spend those final months with her husband. The paper also reported that the songbird is “…strong and handling life without René as well as she can.” It continues by saying that there are days when the she feels terribly overwhelmed and unwilling to move on. However, René remains her constant motivation and the star is propelled by the knowledge that he would have wanted her to continue doing what they both loved – music.

The music fraternity has certainly been observant of Angélil’s contribution to the industry. It was a poignant moment when a homage was paid to the late René Angélil at the Grammy’s held on February 15 during the ceremony’s ‘In Memoriam” segment.

Hats off to Celine, who’s bravely trying to move on from her devastating losses.