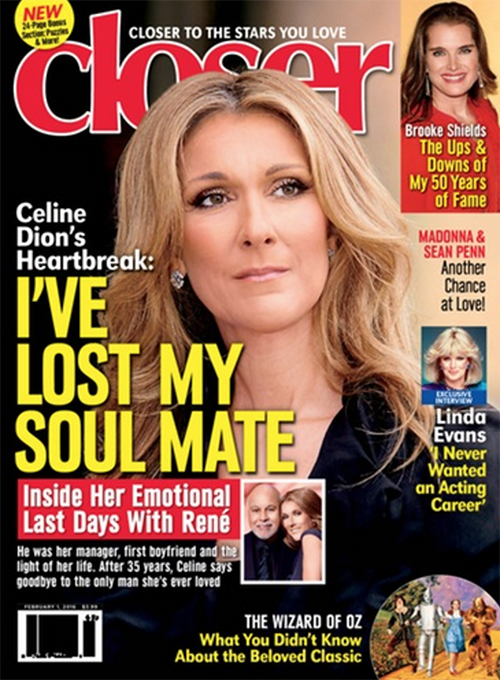 Celine Dion was left heartbroken after the death of her husband and soulmate, Rene Angelil. Celine Dion spent the final days with Rene Angelil, cherishing every last moment together, before he passed away due to end stages of throat cancer.

While Celine, friends, and family had been preparing for his death, his passing did sort of sneak up on everyone. Closer Weekly spoke with a friend of Celine’s, who revealed, “René was actually doing pretty well over the holidays. He was in very good spirits. Everyone feels now that René — even subconsciously — knew he was at the end.” They continued, “He found some inner energy to really be present for his family during the holiday celebrations.”

Celine really wanted to have the last Christmas to cherish as “she tried to make all the lasting memories that she could,” an insider shared. Celine and Rene shared their final Christmas together alongside their three boys, René-Charles (14) and their adorable twins, Nelson and Eddy, who are just 5. They even had Rene’s grown kids – Patrick, Jean-Pierre and Anne-Marie Angélil – there to spend the holiday together.

The source continued, “He was all smiles and laughing as Nelson and Eddy ran around the house.” They even added that, “I think he felt warm, satisfied, and was at peace with himself.”

That has got to be so encouraging for Celine. To know that her husband could leave this world at peace with everything, knowing his family was going to be okay and that they would have each other to lean on in the wake of his imminent death, probably helps with the loss.

Though Rene’s burst of holiday energy was a welcome surprise, it was bittersweet for Celine, as a friend revealed, “I think seeing René rally a bit over the holiday gave her some hope that he still had some months left.”

Rene loved his wife and family so much. He didn’t want to leave a complicated list of things, including funeral arrangements, for Celine to deal with once he passed. People reports that “René was generous enough to prepare all of this since the last few months with Céline.” Celine’s stylist and longtime friend Annie Horth shared, “He didn’t know when it would happen, but he really wanted everything to be already prepared.”

That is so sweet and selfless. What a beautiful, final act of love. May Celine Dion find healing soon as she mourns the loss of her soulmate.