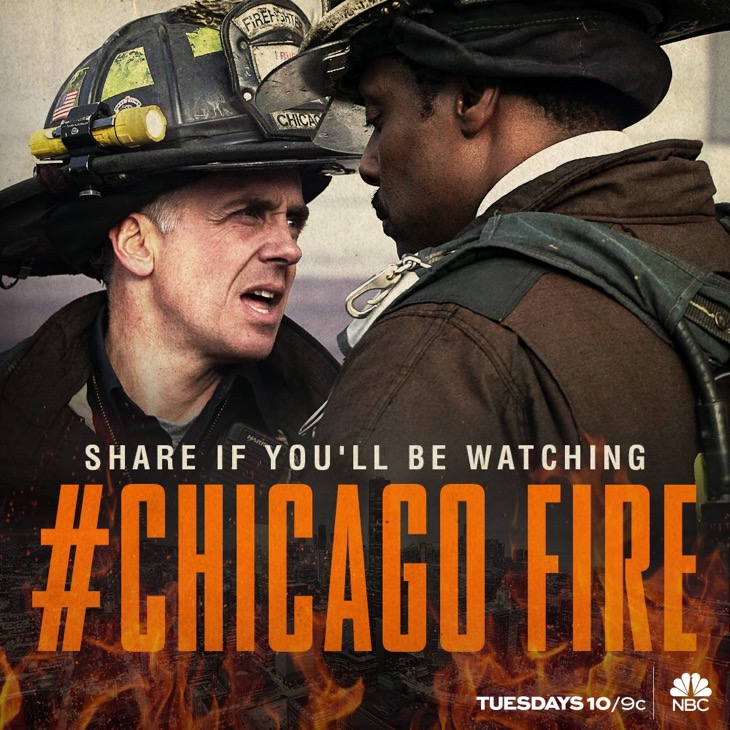 Tonight on NBC Chicago Fire returns with an all new Tuesday, February 2, season 4 episode 13 called, “The Sky Is Falling” and we have your weekly recap below. On tonight’s episode, the team responds to a mass shooting; Casey (Jesse Spencer) investigates the missing money from the fund-raiser.

On the last episode, Freddie’s father begged Herrmann to forgive his son’s assault; Casey discovered that a makeshift shelter housing people displaced by the tornado may close; Casey attended a fund-raiser at the request of an alderman; and Dawson and Brett experience repercussions after telling Boden about Chili’s erratic behavior. Did you watch the episode? If you missed it we have a full and detailed recap, right here for you.

On tonight’s episode as per the NBC synopsis, “the team responds to a mass shooting; Casey investigates the missing money from the fund-raiser; Jimmy agrees to represent the firehouse in a boxing match against the Chicago PD’s 21st District; and Chili’s behavior continues to be an issue for Brett.”

Tonight’s season 4 episode 13 looks like it is going to be great and you won’t want to miss it, so be sure to tune in for our live coverage of NBC’s Chicago Fire. While you’re waiting sound off in the comments down below what you think of this season of Chicago Fire so far!

The city of Chicago had been sent into an all-out panic on tonight’s all new episode of “Chicago Fire”. And the only people that at least seemed to have the answers about what was going on turned out to be Homeland Security.

Apparently someone or, in this situation, possibly a specific group of people had sent up beforehand a string of bomb hoaxes to go off all over the city. And so for the first few hours of this emergency, the fire and police department had been running back and forth trying to answer all the “911” calls while it was supposedly someone else’s job to figure out whether or not these hoaxes that Chicago was dealing with were in fact just hoaxes or actual emergencies. So when Homeland finally deigned to speak with the heads of all the local departments, Firehouse 51 for one had been relieved.

It seems they too wanted to know what was going on but the situation proved to be direr than they could have ever guessed. Apparently Homeland as well as Agent Alex Ward had figured out that all the emergency calls were a ruse to spread first-responders thin. Which would then allow the real terrorist attack to happen.

So Firehouse 51 had been asked to keep an eye out. They were told to report anything that appeared to be a legitimate threat and as they waited for that happen – they did their best to try and get along with everyday life. Therefore, Mousche went ahead with ‘Battle of the Badges’

‘Battle of the Badges’ had been Mousche’s brainchild. He had arranged for someone from 51 and the nearby precinct to fight at Antonio’s gym. And he had been hyping the whole event by saying all the money from the boxing match would be donated to a charity in need. Though Mousche failed to mention that the “charity” was mainly a cover.

The real reason behind the ‘Battle of the Badges’ was that Mousche needed some extra cash for his wedding to Platt. Her father had gone broke a while back and so there hadn’t been anyone else to give Platt her dream wedding. But, Cruz hadn’t been all that enthused about spending fifty dollars on a ticket to see a fight when he knew it was going to end up being part of the flower arrangements. So he was already asking for a refund when 51 got an emergency call.

Now a lot happened before the house got that particular call but it all seemed meaningless afterwards. Chili and Brett had been fighting again because Brett had found out that the last firehouse Chili worked in had fired her because of her drinking. So the ladies had then argued about Chili’s drinking problem however the call they received to the Morrsion Center for African-American Culture had been the one thing to stop the fighting.

The ladies had gone in inside of the building as well as Casey and his guys. And they were barely inside before they began to hear gunshots. So their first priority had been to take cover in whatever secured location they could find.

However, the ladies hadn’t been so lucky. They had been a room they couldn’t secure and so they had to merely rely on hiding while they heard one of the gunmen get closer and closer. Until he was eventually in the room with them and had gotten a piece of candy from out of the nearby vending machine.

So it had been pretty tense inside of the building, but the firemen that were outside didn’t have it so easy either. People had coming running out after the first gunshots and they had been caught unaware by the gunman on the roof. It seems that it had been that guy’s job to stop people from leaving the building alive and he had taken shots at both the people fleeing as well as the firemen that were trying to help them escape.

And therefore the Chief didn’t want anyone trying to be a hero. But Severide and Cruz had seen that someone had written for help on one of the side windows and they had convinced their Chief to let them use one of the ladders. They said the gunman wasn’t looking at that side of the building and Agent Alex Ward had showed up in time to offer them support. So what else could the Chief say but yes.

Though the mission to save the one person they could have a drawback. They thought the gunman was training his eye on the front of the building and at the last second he saw them at the side. So he began shooting at them and hit Alex although she did return fire.

And so the gunman on the roof had been taken out. Yet there was still people and firemen trapped inside with two gunmen. So thankfully Casey took charge of the situation. The building had smoked up because the gunman had disabled the sprinklers so Casey used the smoky area as a cover for evacuating as many as he could from the building.

But neither Brett nor Chili were able to leave until the SWAT were able to make it into the building. So they hadn’t gotten the overall number of injured or dead until after they left the building. And it was four dead and seven injured.

So ultimately Mousche and his fiancée decided to donate all of the money that had been raised to the victims and their families. They had been targeted by a hate group and Mousche just wanted them to have hope again. And know that are good people still out in the world.