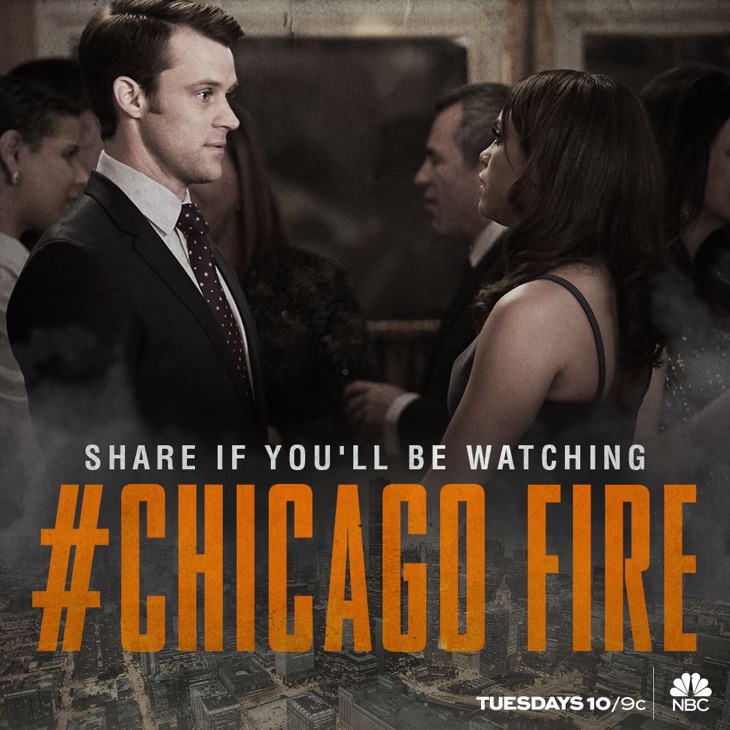 Tonight on NBC Chicago Fire returns with an all new Tuesday, April 5, season 4 episode 18 called, “On the Warpath” and we have your weekly recap below. On tonight’s episode, Sylvie (Kara Killmer) witnesses a murder and is threatened by the shooter not to go to the police.

On the last episode, Severide and Cruz found a child’s remains inside a chimney while investigating a possible carbon monoxide leak inside a home. In other events, Casey braced for the worst in his run for alderman while Alderman Becks continued to bad mouth him to the press. Did you watch the episode? If you missed it we have a full and detailed recap, right here for you.

On tonight’s episode as per the NBC synopsis, “While responding to a call involving a victim incapacitated with a leg wound, Sylvie Brett (Kara Killmer) witnesses a murder and is threatened by the shooter not to go to the police. Unsure of what to do, she tries to track down Antonio (guest star Jon Seda) from Chicago PD. Elsewhere, Firehouse 51 jumps into action when a fire breaks out inside a restaurant, trapping several people inside a vault. Meanwhile, with his wedding day to Trudy (guest star Amy Morton) fast approaching, a nervous Mouch (Christian Stolte) starts to get cold feet. “

Tonight’s season 4 episode 18 looks like it is going to be great and you won’t want to miss it, so be sure to tune in for our live coverage of NBC’s Chicago Fire. While you’re waiting sound off in the comments down below what you think of this season of Chicago Fire so far!

Matthew Casey has become the new Alderman of the 52nd Ward yet his victory is somewhat bittersweet. Casey had run for Alderman because he thought he could make more of a difference if he was in power and, unfortunately for him, he’s finding out that power doesn’t work that on tonight’s episode of “Chicago Fire”. And a recent newspaper article has also made it awkward with Dawson.

Apparently someone had mistakenly written that she was his wife. So the two had laughed it off at the time, but eventually they realized they haven’t talked about marriage. Or about children for that matter seeing as Dawson’s earlier pregnancy had been a surprise to the both of them. And so they had a lot of ground to cover.

Only not to the time to cover it. First they had gotten caught up with the many calls and emails that Casey was getting. Then that thing with Brett had happened. Brett and Jimmy had gotten a call about an injured young man and they soon saw that the victim was suffering from a gunshot wound. And yet something happened when Jimmy went to go call for backup thereby leaving Brett alone.

Someone had run up on Brett and shot the victim again though that time in front of her. So Brett had been left alive as a witness to murder, but the shooter hadn’t been dumb. He had decided to take her license in order to scare her into silence. And knowing that such a person knew where she lived, had Brett on edge about trusting police custody.

Brett and Jimmy had reported what happened yet Chicago PD had sent a baby-faced cop to protect her. So she wanted to know if she could get someone else. Like maybe Antonio or someone just as capable that Sgt. Platt could fine. However, Platt took the weeks leading to her wedding off because she wanted to focus on the big day. And so there had been a reason for Mouch freaking out lately.

Mouch had been told that he had to write his own vows. But he kept up coming up with rubbish and was inviting more people to the wedding that either he or Platt had planned. So Platt was busy trying to make room for Stella at Severide’s table and the guys at 51 were dealing with the fall-out of a fire at a place called the Vault Bar. Which had had walls made of Polystyrene and that sort of material burns up faster than anything else.

So Casey ended up with something slightly controversial to bring up at his first council meeting. Yet John Gallo of Gallo Construction had gone to the firehouse before that council meeting and he had tried to bribe Casey. With a round of golf of all things. And so Casey was in the middle of figuring out how to let John down when Dawson hit him with the one-two punch.

Dawson told Casey that John Gallo had his hooks into every other councilman. So Casey wasn’t going to be able to sway one much less an entire council of people who use and have used the Gallo money to fund their elections. Although he had to try and so he made as many calls as he could. And spoke to them about Gallo Construction’s unsafe practices in using deadly building material

Yet, the house was more concerned about Brett. Brett later had another run-in with the shooter. So she and Jimmy had finally gone to Chief Boden to tell him about what happened and he had been able to pull the necessary strings to get her better police protection. And therefore Brett had thought she was safe.

Jimmy had offered her to drive her to home and her friends had even stayed the night in order to cheer her up. However, the shooter had called Brett and he told her that eventually the police and her friends were going to leave. So she had reported that to Boden. And Boden thought it was necessary to take her off call.

Boden said he had to protect her and that they couldn’t risk anyone getting injured because a madmen showed trying to get to Brett. So Brett had to reluctantly agree with her Chief’s decision and funnily enough she had given Jimmy and Dawson (who replaced her in the ambulance) the call about another shooting. Apparently the cops had finally found the man that was targeting her and he died at the scene.

So Brett was safe in the end. But she told Jimmy that she wasn’t sure she would have done anything to help that man if she had been the one out in the field. And so she wasn’t actually ok. She was just going through emotions.

Meanwhile, however, Casey had lost his bid in changing his fellow Alderman’s mind. So he had gone to Mouch and Platt’s wedding a little upset. Though he hadn’t expected that Dawson would tell him during the reception that she was fine with the way things are between them meaning he had been hoping for something more one day while she hadn’t been.