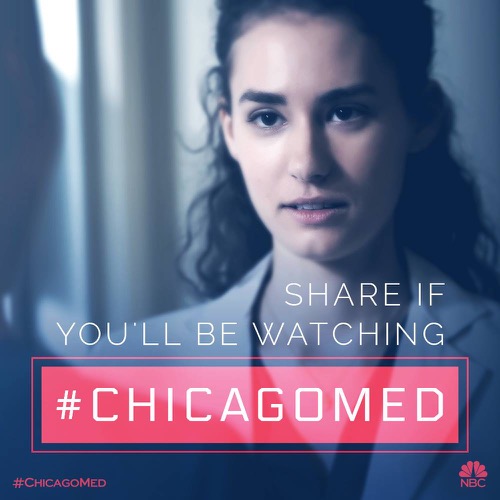 Tonight on NBC their new medical drama Chicago Med returns with an all new Tuesday February 9, season 1 episode 9 called, “Choices,” and we have your recap below. On tonight’s episode Dr. Halstead (Nick Gehlfuss) jeopardizes his career when he goes against a family’s order regarding a terminally ill cancer patient.

On the last episode, Dr. Manning returned from maternity leave and treats a teen with a history of medical issues. Meanwhile, Dr. Choi cared for a former Navy shipmate; a Saudi prince arrived for a surgical procedure, but only from a hotshot surgeon; and a romance bloomed between Sarah and a lab tech. Did you watch the last episode? If you missed it, we have a full and detailed recap right here for you.

On tonight’s episode as per the NBC synopsis, “Dr. Halstead jeopardizes his career when he goes against a family’s order regarding a terminally ill cancer patient. Meanwhile, April and Dr. Reese treat a homeless man, and Choi’s personal issues emerge while caring for a bipolar patient.”

Tonight’s season 1 episode 9 is going to be exciting. We’ll be blogging it right here for you. In the meantime hit up the comments section and tell us your thoughts on this new show and enjoy a sneak peek of tonight’s episode below for your enjoyment!

Jennifer Baker had been diagnosed with end stage Lymphoma four years and she was just trying to enjoy what little time she left when on tonight’s episode of “Chicago Med” she had been brought in because she had passed out after simply going for a walk. So the fall and the fall-out from the fall didn’t really matter to Jen. She had informed the doctors that she has DNR on file and that all she wanted to do was return home where she could peacefully past with her family around her.

But for some reason Jen had triggered something in Will. He felt like his patient was being incredible selfish because she wasn’t thinking about her family. And what’s best for them. So, without asking, he talked to a drug rep that he knew and asked if Jen could be put on their latest trial for non-Hodgkin’s Lymphoma.

So that alone was a breach of protocol. He had gone behind his patient’s back and also hadn’t consulted the fellow doctor on her case. Yet Will wasn’t the only one acting out of character. There had also been Dr. Downey.

Now Downey had been strange last week but tonight he had genuinely left Connor bewildered. Connor had been working on a fourteen-year-old patient that had been brought in after he impaled himself trying to climb a fence when suddenly Downey showed up. No one had called him but he had showed up all the same. And he had even offered his assistance on repairing the damage to the chest cavity.

So that had thrown Connor’s attendee. But what had left them both mystified was the part where Downey asked for Connor’s assistance. That Connor was smart enough to give though he later questioned.

Connor had been training as an emergency surgeon and what he does on a regular is completely different than what Downey does. Yet, without anyone noticing, Downey had chosen Connor as his newest protégé and that had made his girlfriend very jealous. So already Downey’s interest had caused an issue with Connor’s fellow doctors.

But Will hadn’t been concerned because he had been too busy trying to force a clinical trial on a woman that was ready to die.

Will had just gone up to her and had told her the good news yet he never even considered that she would turn him down. Which she did. Although Nat turned out to be the only one that was willing to back her up on what is essentially the patient’s decision.

Though that hadn’t won her any favors. Will had later accused Nat of letting down the patient but she told him that she could say the same. She said that Jen had already gone down a long road and that her death should at least still be in her hands.

And Will just didn’t get that. His own mother after all had cancer and he knows that she would have jumped on whatever drug she could if it allowed her to stay alive longer. So even as he told Nate that story – he still refused to see how his past was coloring his view of what was going on with his patient.

But the one step too far did come. Jen had flat-lined so Will had disregarded her DNR and tried to tell her husband that as her power of attorney he could make whatever decision he wanted. And the poor man had wanted his wife to live but he just couldn’t go against her wishes.

So Will chose to do that for him. He performed CPR despite Nat telling him how wrong he was and managed to resuscitate Jen. Where she then needed an air vent and was forced into a quality of life that she had previously tried to fight.

And therefore no one ended up thanking Will. In fact, the family later asked to be left alone and he was eventually called in to report to Sharon. And Sharon had a list of what was going to happen moving forward.

Sharon had then gone on to remove Will from Jen’s case and she told him that he was no longer allowed to have contact with anyone in the family. And that means he still couldn’t check in with Jen’s doctor, Nat. Nat had unfortunately been chosen to replace him as Jen’s doctor because the woman had to be moved upstairs to a different ward seeing as she wasn’t breathing for herself.

Though the most important thing that Sharon had told him was that Jen’s DNR wasn’t about him or what he could do for his patient. And that turned out to be a very important lesson. Ethan had a patient that needed psychiatric drugs to maintain everyday life but those same drugs were causing kidney failure.

So Ethan told Daniel that maybe the patient should buck-up. “Learn to control herself” he said and Daniel had to be the one to inform that mental disorders doesn’t necessarily work like ankle sprains. And after Daniel had said that, it had made Ethan look at his own situation differently. So Ethan did go to Daniel’s office afterwards and he ready to talk about how he has PTSD but has been trying to ignore it for months.

But Dr. Downey had gotten into a car accident where it was later revealed that he’s known about his other condition, namely the dying one, for the past six months. So that’s the reason he’s been checking out Connor. He’s been wanting to teach the younger man to one day replace him in cardiac surgery.

And while Connor had initially turned him down, he ultimately chose to see if Downey was right about him. So Downey did find his protégé.

Yet Will only nearly missed a suspension. The Baker family was suing him for going against Jen’s wishes and that means he’s going to be walking on thin ice until the case settles. So Will has expected Nat to side with him but she hadn’t.

Instead she accused him of always dismissing her which was what he did when she tried to stop his CPR and so she told him that she was tired of it. And simply walked away. Though rather than think about it what he did, Will chose to go out for drinks with the drug rep now that Nat was “off the table”.