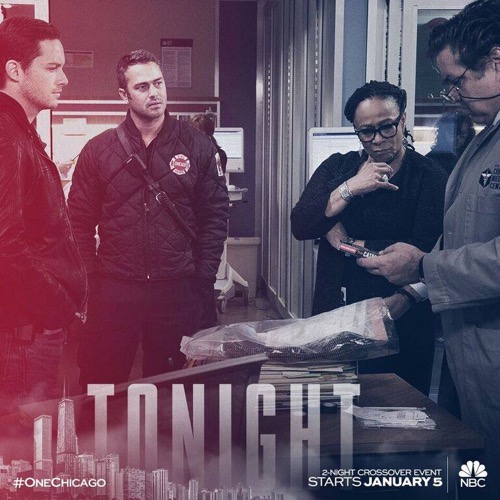 Tonight on NBC their riveting police drama Chicago PD continues with an all new Wednesday January 6, season 3 winter premiere called, “Now I’m God” and we have your weekly recap below. On tonight’s episode, a doctor with a link to Voight is investigated when four of his patients are committed to Chicago Med following chemo overdoses; and Burgess (Marina Squerciati) and Platt (Amy Morton) work together to clear Roman’s (Brian Geraghty) name.

On the last episode, a decapitated body found in Lake Michigan was linked to Voight’s social circle; Roman made a grave mistake; and Olinsky was upset when Antonio doesn’t consulted him before making a decision that could impact Michelle’s future. Did you watch the last episode? If you missed it, we have a full and detailed recap right here for you.

On tonight’s episode as per the NBC synopsis, “a doctor with personal connections to Voight (Jason Beghe) is under investigation when four of his patients are committed to Chicago Med after an overdose of chemo. The doctor denies Lindsey (Sophia Bush) and Halstead (Jesse Lee Sofer) access to his files, but after obtaining a warrant the team is able to track down his patients and discover all of them have been poisoned with unnecessary chemo. Meanwhile, Burgess (Marina Squerciati) and Platt (Amy Morton) work together to clear Roman’s (Brian Geraghty) name.”

Tonight’s episode of Chicago PD kicks off with Burgess at the hospital questioning the doctors – a woman named Jessica was brought in after a suspected overdose, she was found in a burning building. Hank and his team have set up shop at the hospital. Three women: Jessica, Dani, and Carol have all been brought to the hospital in the last 24 hr for an overdose of chemotherapy for cancer they don’t have.

While they are talking the Dr. marches in – another woman was just brought in with the exact same symptoms as the first three women. She gives Hank and his team the woman’s purse and tells them to “have at it.” Erin rifles through her purse and finds her ID, the woman is a 42 year old named Leah – and apparently she is a shift manager at a local call center. They find her insurance card and Ruzek gets to work locating her doctor. Atwater searches Leah’s cell phone and realizes that Leah knows their other three victims – and she had all of their numbers stored in her phone.

Ruzek gets off the phone and says that he has the doctor’s name – it’s Dean Rible. Hank is upset, he obviously knows Dean, he storms out of the room. Erin chases after him and tells Hank that he can’t go because Dr. Dean won’t cooperate with him. Hank gets choked up, apparently Dean was the last cancer doctor that Camille went to before she died. Erin promises him that if Dean is the one doing this to the women – they are going to “nail him.”

Erin pays Dr. Rible a visit an informs him that Dani is dead – and Jessica, Carol, and Leah are all in comas. RIble gets choked up, they were all his patients and he was really hoping they would make it. Rible says that he was a “fighter for his patients.” Erin wants their records, Rible tells them to come back with a warrant. Erin says that she knows that he is poisoning his patients and she is going to prove it.

Burgess arrives at the police station and Detective Stark is snooping around still – he is investigating Roman’s shooting. Burgess argues with Stark and tells him that the witness told the police her husband had a cop. Stark informs her that no gun has been found, he orders her to “stay out o his investigation” and storms off.

Hank and his team suit up and head back to RIble’s doctor office – when they arrive Atwater and Jay find a woman in an office shredding documents. Erin finds RIble with his lawyer already, Hank arrives – and Rible recognizes him. He says that “Camille’s death was hard on him too.” Hank sneers at him to never say his wife’s name again. Hank arrests Rible and says that he is under arrest for “obstruction of justice” because his employees were shredding the client files. The lawyer objects but Hank marches Rible off in cuffs.

Burgess pays Callie a visit, she is still determined to prove that Ritchie had a gun the night that night. She questions Callie again – she is trying to figure out how Richie got to her house, because his car wasn’t outside. Callie says that Burgess should talk to Richie’s brother Denny, he drives him around sometimes.

Hank and his team beginning questioning all of Rible’s patients, they find 47 more women who were lied to and told that they had cancer and poisoned with chemo drugs. Dana cuts a deal with Rible’s lawyer an the DA, his license is suspended for a year an he has five years probation. Hank is furious when he hears the news, he wants a murder conviction. The DA tells him that he needs to get more evidence, and actually prove that Rible is responsible for their deaths.

Hank is determined to get more evidence, he enlists the PD’s therapist for help. He informs Hank that Rible’s patients weren’t just looking for cancer treatment, they wanted a guide. Charles tells Hank that he will take the stand and testify against Rible, but he needs a sit down with him first. While Hank and Charles are talking – a doctor reveals that Jessica has passed away too.

Burgess shows up on Denny’s doorstep. She tells him that she knows he was there that night and took his brother’s gun after Roman shot him so that he would look innocent. Denny tells her she is crazy, and he doesn’t have the gun, and then he promptly slams the door in her face.

Meanwhile, Charles “accidentally” bumps in to Rible to the coffee shop after he is released from jail. He quizzes him about why he was arrested and Rible is more than happy to sing like a canary about his cancer patients to a fellow doctor.

Erin and Hank stay up all night pouring over Rible’s medical records – they find proof that he was giving them 7 times the legal limits of chemo treatments. And, he couldn’t even run it through the insuranc companies because they wouldn’t approve it – s he was paying for the drugs out of his own pocket. They share the evidence with Dana and she says that it will be enough to get a conviction. Hank and Erin interrupt Rible while he is speaking in front of a packed event an arrest him for murder in front of camera crews.

There is another hiccup in the case – the judge won’t let the fraud victims testify against Rible because they will be prejudicial. Hank wants to take the stand and testify against Rible since he treated his wife. The DA won’t allow it, she is afraid that Hank will ruin the case for them – she says that she is going to put Erin on the stand instead. They head to court and the witnesses take the stand – including Dr. Charles. He testifies that Rible clearly had a “God Complex” and was getting off on the fact that his patients needed him to survive.

Hank gets his way – and gets to take the stand. The judge is obviously not a fan of Dana, and is barely letting her get a question in edgewise. Hank – of course – goes off script and announces on the stand that he witnessed Dr. Rible inject his own wife with chemo drugs right before she died 6 years ago. Hank gets emotional and recounts his wife’s battle with cancer and all of the drugs that Rible was force-feeding her. Of course, Rible’s lawyer turns the table and tries to say that Hank is just “in mourning” and out for revenge over his wife’s death.

Hank steals the show and rants to the jury that Rible copped to fraud and admitted to killing women to make some extra cash – since they opened the door and discussed Hank’s wife, now they can reenter all of the other women from the fraud case. A verdict comes in later that date – Erin an Hank head back in to court and are pleased to hear that Rible was convicted guilty of murder on all charges.