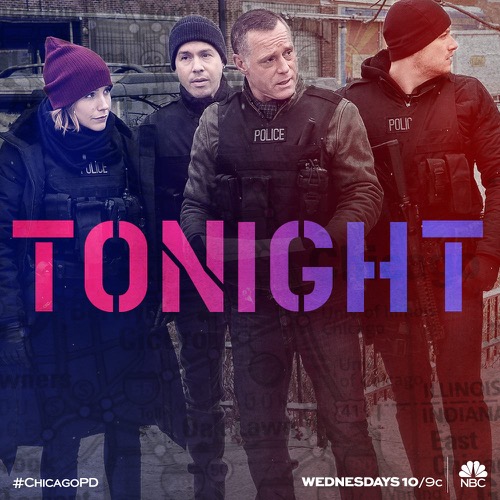 Tonight on NBC their riveting police drama Chicago PD continues with an all new Wednesday February 17, season 3 episode 15 called, “A Night Owl” and we have your weekly recap below. On tonight’s episode, Burgess (Marina Squerciati) stops a college professor with a duffel bag full of heroin at a sobriety checkpoint; Roman (Brian Geraghty) tells Platt (Amy Morton) of his desire to become a field training officer.

On the last episode, after infamous criminal Gregory Yates (guest star Dallas Roberts) escaped from a New York prison, Lindsay (Sophia Bush) and the team learn that he intended to flee New York and was headed for Chicago. Did you watch the last episode? If you missed it, we have a full and detailed recap right here for you.

On tonight’s episode as per the NBC synopsis, “while working at a sobriety checkpoint, Burgess (Marina Squerciati) finds a duffel bag full of heroin in the truck of a respected college professor who claims to know nothing about how the drugs ended up there. Voight (Jason Beghe) decides to hold off on charging the unlikely suspect and Olinksy (Elias Koteas) and Antonio (Jon Seda) follow up on a lead to see who is behind the drug smuggling.

Tonight’s episode of Chicago PD kicks off with a late night road block to check for drunk drivers. Burgess pulls over a man who says that he is on his way to a university in Canada for a lecture the next day. Burgess thinks he is acting strangely and tells Alvin to bring down the K-9. The dog indicates that there is something in the trunk of the car – they pull up carpeting in the trunk of the car and find 10 kilos of heroin. Burgess arrests the man – who insists he has never seen the drugs in his life – and reads him his rights.

Hank and Antonio question the professor, who’s name is Adam Ames, back at the precinct, his bail is set at half a million dollars because of the large amount of drugs he was trying to move. Hank thinks that someone put him up to transporting the drugs, he wants a name.

Hank and Antonio brief the rest of the team on Ames. They think that he might not have even known that someone filled his car with drugs. Erin decides to bring Burgess in on the case since she was the one that pulled the drugs off the street and found them. Meanwhile, Trudy is hitting the road with Roman – he wants to be a Field Training Officer, and she is testing him to see if he is ready.

Erin and Burgess head to Ames house to question his wife and teenage daughter – they laugh at the accusations and Ames wife announce she is calling their lawyer. His daughter rants that they have the wrong guy and her father doesn’t even know anyone who does drugs.

Alvin and Antonio locate the garage that built the trap door in Ames’ car. He says that he doesn’t know Ames – a chump named jOhnny Z brought in Ames’ car. He gives up Johnny’s address and the Chicago PD rush there. When they arrive at Johnny’s house – the building appears to be on fire. They kick in the door and try to get through the smoke to make sure no one is inside. They find a man tied up that has been lit on fire. In another room Burgess and Erin find a little boy lying on the floor in a pool of blood – someone shot him in the head.

The Chicago fire department arrives – they confirm that the dead man was burnt alive. Hank tells them to get the body down to the morgue and get a positive ID. A woman shows up outside sobbing because her son was missing, he was selling candy bars up and down the street. Alvin heads outside and breaks the news to her that someone shot and killed her 9 year old son.

Back at the police station, Antonio heads back in to question Ames. He asks him if he knows Johnny Z, Ames insists that he doesn’t. When Ames learns that the little boy was killed, he is upset, he says that he got his car services last week – maybe they put the drugs in the trunk then.

Burgess and Erin find Johnny Z’s girlfriend – she isn’t very helpful, but she gives them a name – she says that they need to talk to Gregor Torros. Atwater and Ruzek track Gregor down at work and he tries to make a run for it. They chase him down in the building that he is going construction on. They chase him up to the roof and he sobs that he can’t talk to the police because someone will come for his family – then he jumps and commits suicide. Their only lead in the case is now dead.

Erin and Burgess learn that Ames was renting an apartment in an upperclass part of Chicago – they head back to Ames’ house and his wife and daughter insist that they don’t know anything about the apartment. Pearl takes Erin aside and cries and begs to see her dad – Erin says that once everything is straightened out he can see his family, but not until the case is solved.

Back at the precinct, Hank is still working on Ames. He tells him that they know about his secret apartment. Ames insists that the apartment has nothing to do with this – and then he lawyers up and refuses to answer any more questions without an attorney. Hank roughs him up a bit and handcuffs him.

Atwater, Alvin, and Jay head to Ames’ secret apartment – the landlord tells them that they wouldn’t “believe the shady characters coming in and out.” Jay finds boxes in the closet full of letters from prison – Ames had at least 10 different penpals in different prisons. Jay says that the letters are “pretty graphic.”

They bring the letters back to the precinct and start reading through all of them. His most recent penpal was a conman named Peter Walker – he gave his parole officer Ames’ address when he got out of jail two weeks ago. And, it gets better – Peter Walker was Johnny Z’s cellmate when he was in prison.

Hank and Jay sit down with Ames to talk to him about his prison penpals – he explains that his wife was working with convicts for her job and he got involved. Ames says that he helped the other prisoners, but he and Peter fell in love. Ames insists that Peter is innocent – then he confesses to the drugs and he says that it was all his idea to run drugs. Ames says that a man threatened to kill Peter over a $50,000 debt if he didn’t pay up. So, Ames agreed to run drugs to Canada to make enough money to pay off Peter’s debt.

Erin and Burgess track down Peter Walker and bring him in for questioning. He insists he doesn’t know anything about the drugs and wasn’t in on Ames’ plans. Jay shouts at Peter that a 9 year old boy is dead and so is Johnny Z! Peter laughs that he and Ames aren’t in love, he just let him cuddle because he needed some cash to get on his feet.

Ames’ wife shows up at the precinct and she is hysterical – she says that someone took her daughter Pearl and said that her husband owed them $100,000. She got a message saying that if she didn’t pay up, they were going to kill Pearl.

When Ames learns that they have his daughter he starts singing like a canary – he says that Peter knows the drug dealers and set them up. Ames doesn’t know anything else, Hank says they need info to get Peter to start talking. Ames says that Peter has a brother named Marco that he would do anything for. Hank brings in Peter’s brother Marco as leverage, Peter finally talks and says that Gregor introduced him to his boss – a man named Gasper and they are holding Ames’ daughter at the construction site.

Hank, Erin, and Alvin head to the construction site to get Pearl – they wind up in a shoot out with Gasper’s guards but they get Pearl back before she is harmed. Gasper is arrested and they bring him in. At the police station Erin warns Pearl that her father is in serious trouble – and a little boy is dead. Erin lets Pearl in to see her dad and they share a moment before he is officially booked and charged.