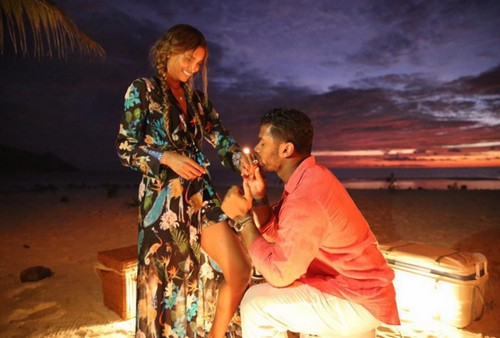 The clip was captioned “God is so good! I’m grateful for you @DangeRussWilson. You are truly heaven sent and I’m looking forward to spending forever with you”. Russell Wilson was not to be left out either, he also posted “She said yes!!! Since Day 1 I knew you were the one. No greater feeling…#TrueLove Ciara.

With that sparking number on her finger, Ciara was practically singing in her joy on the momentous occasion. The happy couple was certainly giddy on something, if not love, then that bottle of wine in the background.

This all happened while they vacationed in Seychelles, a beautiful archipelago in the Indian Ocean off the mainland of East Africa. From the beginning of their romantic relationship in April 2015, the pair made numerous appearances including the 2015 BET Awards, where they walked the red carpet.

Their relationship was also one for the books as E! News reported in July 2015 that the pair decided to remain celibate until they became engaged. Russell Wilson, a quarterback with the Seattle Seahawks, said in an interview (while Ciara was away on tour) “I was looking at her in the mirror, and God spoke to me. He said, ‘I need you to lead her.’

Even without adding celibacy to the mix, the couple’s relationship was also plagued with controversy due to Ciara’s ex-fiancé, rapper Future airing his discontent with the son he shares with Ciara – Baby Future Zahir Wilburn- spending so much time with Russell Wilson.

Instead of with him, his biological father As recently as March 3, CDL highlighted that while Ciara was shooting a music video, her beau Russell was babysitting Future’s son.

When the pair wed, Russell will be Baby Future Zahir Wilburn’s legitimate stepdad, so will Future now push for the full custody of his son? As it is, Ciara and future have hardly been civil in rent months.

Will Ciara and Russell Wilson’s engagement bliss last much longer when Future considers another man may be raising his child?

God Is So Good! I’m So Grateful For You @DangeRussWilson. You Are Truly Heaven Sent, and I’m Looking Forward To Spending Forever With You. ❤️