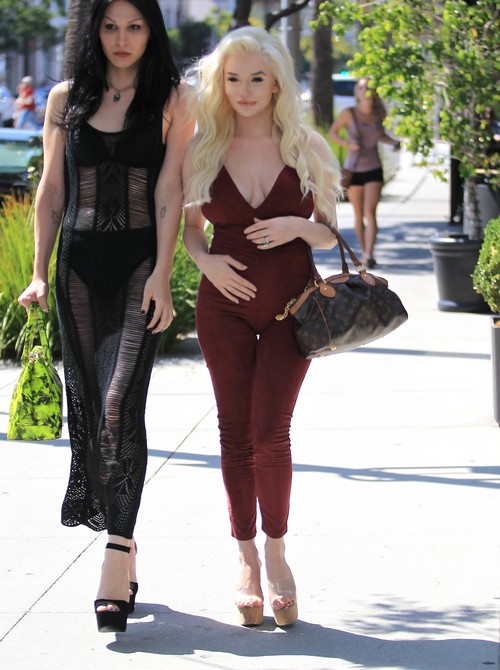 A heartbreaking news story surfaced on Sunday, July 17, when 21-year-old Courtney Stodden, a model and reality star, confirmed to ET that she had a miscarriage last week.

She used her Instagram account to post the sad news. Stodden’s representative released a statement soon after, “Courtney and her husband, Doug [Hutchison], are at an emotional loss for words and are using this time to grieve with their close family and friends. Please respect their privacy as the couple try to cope with losing their precious baby and seek the support they both need.”

This is not the first time that Stodden used social media to document her pregnancy journey since announcing the news in May. She posted a picture of her baby bump, wishing actor husband, Doug Hutchison, his “first father’s day.”

While the reality star was glowing, six weeks into her pregnancy, she also admitted to Us Weekly about her bouts of depression that she found hard to deal with as a mother-to-be. She also added that due to her depression, she often struggles with her sleeping patterns and appetite, which is not good for the baby.

Despite all the challenges and the emotional journey, the blonde model turned reality star confessed that she already felt a deep connection with her unborn child. The teen bride disclosed her pregnancy news on May 16, exclusively to Us Weekly.

Courtney Stodden was only 16 and Doug Hutchison, 34-years-older than his wife, when the two got married on May 20, 2011. However, in 2013, the couple parted ways briefly, only to reunite again in 2014. In May, the couple announced to the world that they will be having their first child together soon. However, on July 7, Stodden suffered a nasty fall due to which she lost her baby.

As she was strolling in the neighborhood in Los Angeles, she tripped and fell on her hands and feet. While the fall definitely means bad for the baby, it is not known if that was indeed the reason for her miscarriage.

Needless to say, it is never easy to lose your unborn child, and is especially difficult for a couple if it was their first one. Courtney Stodden broke the pregnancy news in May. Even though she admitted to feeling “overwhelmed,” she never once stopped flaunting her growing belly on her social media accounts, reported Hollywood Life.

In one of the pictures, one can also see Doug Hutchison rubbing his wife’s swollen belly while looking deeply at his wife’s changing body.

This is undoubtedly a tough time for the grieving couple, and CDL sends their love to help them cope with the tragic news.