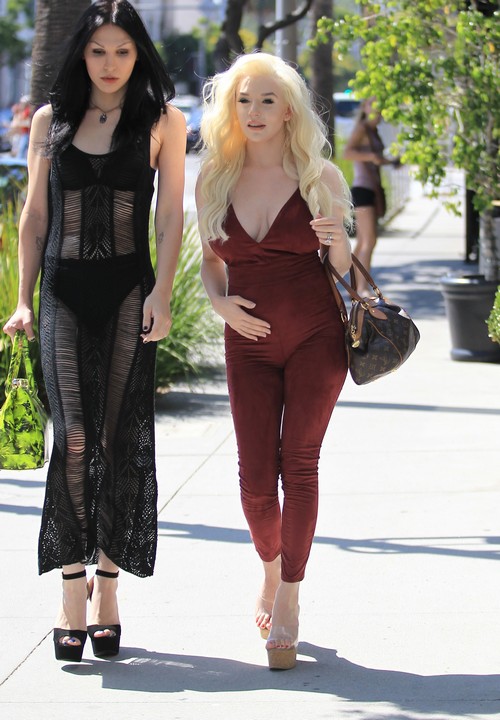 Pregnant Courtney Stodden clutched her baby bump as the reality television personality took a stroll through Beverly Hills. Courtney was decked out in a red jumpsuit. Courtney and husband Doug Hutchison couldn’t wait to share their baby news and let the world know when Courtney was just barely 4 weeks along.

There really isn’t anything Courtney won’t share via social media about her pregnancy. On June 29 Courtney tweeted, “Pregnancy has got me cranky. Like really cranky. At least right now. Then in an hour I’ll be nice. Hormones be ragin.” Thanks for sharing Courtney but that really is TMI.

Things have been messed up with Courtney Stodden, her mom Krista Keller and Courtney’s husband Doug. During the Lifetime reality show ‘The Mother/Daughter Experiment: Celebrity Edition’ Krista was accused of having some kind of emotional affair with Courtney’s 56-year-old husband Doug.

Allegedly Krista told Doug she loved him at some point. At least that’s what Doug says.

The finale of ‘The Mother/Daughter Experiment: Celebrity Edition’ aired on Tuesday, July 5 and basically Courtney and Krista had resolved nothing during the eight week process. Krista may have thought they did as she gushed that Courtney had complimented her for “putting her heart into this and really trying hard.”

It doesn’t appear that Courtney Stodden feels mom is doing well, but Courtney isn’t okay. “I don’t think she will ever truly grasp the pain she’s caused me” Courtney revealed during the episode. Krista is hurt that Courtney believes Doug over her own mother.

Things don’t look promising for a mother and daughter reunion following Courtney and Krista’s Lifetime reality television experiment. The only time Krista may get to see her pregnant daughter is on Twitter and Instagram. Doug Hutchison and Courtney Stodden certainly post enough photos of Courtney’s growing baby bump.