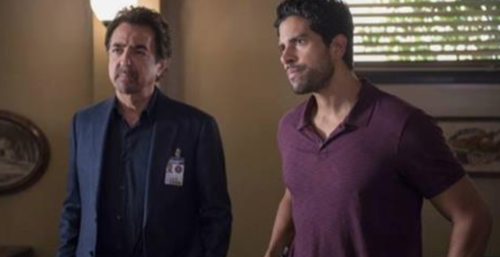 Tonight on CBS their hit drama Criminal Minds returns with an all-new Wednesday, November 9, 2016, episode called “The Anti-Terrorism Squad,” and we have your weekly Criminal Minds recap below. On tonight’s episode season 12 episode 5 the BAU investigates bullying among teenagers.

Did you watch the last episode of Criminal Minds where the BAU team searches for a serial killer along the Appalachian Trail in rural Virginia? If you missed it we have a full and detailed Criminal Minds recap, right here for you.

On tonight’s Criminal Minds episode as per the CBS synopsis, “he BAU investigates whether bullying may be the link between two high school students who are the sole survivors after both of their families are killed.”

The team were called to Wynona, Minnesota after a teenager came home late one night and found her whole family dead. But there were some suspicions about the teenager. Amanda Bergstrom was proven to be an impulsive seventeen-year-old and she actually did have a motive for possibly killing her family. She was apparently the sole beneficiary to life insurance on her parents and without her brother she didn’t have to share that same insurance with anyone. So when team went to Minnesota, they had Amanda in their sights.

However, there was another great suspect. Amanda’s mother Mrs. Bergstrom had had an affair with Ron Ferguson right around the time that her husband became unfortunately addicted to Vicodin and the affair had abruptly ended after Mr. Bergstrom fought to get clean. So the team had to question that. Did Ron feel abandoned and had wanted to get back or was merely vindictive. The answer though was neither. Ron as it turns out, had an alibi for his ex-girlfriend’s death and didn’t exactly have the smarts to pull off the attack with a partner or hired hand.

So Amanda was later treated as a prime suspect. She had a motive, she was conveniently out of the house at a party when his family was murdered, and according to Ron she was also manipulative. Ron had said that Amanda had threaten to tell her father about Ron if Ron didn’t pay her so Amanda had in fact blackmailed him until her mother broke off the affair. Though Emily and JJ had talked to Amanda about Ron and she didn’t hold anything back. The teenager admitted she knew what she did and that she had blackmailed Ron in the hope that he would break off the affair.

Amanda had said that her father was trying to get better at the time and that she didn’t want to risk his sobriety. So she blackmailed Ron as a way to get him to back-off and she had been happy that the affair had eventually stopped because her father had gotten better. Amanda had said that her father started to attend NA meetings and that he had been clean for six months so that had given her a false hope. She had thought that she was finally going to get her family back. Yet, the Unsub took that away from her and the BAU officially ruled her out as a suspect.

But there was a working profile after the BAU ruled out both Ron and Amanda. So they still had something to work with. Like how they had devised that the Unsub was physically fit, that he was a family annihilator because of his need to erase the whole family, and that he would most likely strike again so the team didn’t have to wait that long. They had thought that he would come after Amanda who was the survivor and could be seen as unfinished business yet the Unsub managed to surprise everyone.

The Unsub had attacked another family in the middle of the night and that time their teenager had been at home though for some the Unsub had chosen to spare him. So that second attack drastically changed the profile. The team had originally thought that Bergstroms were the at the heart of the attacks and the fact that the Unsub chose another family to hurt meant it didn’t matter to him. He had wanted to hurt someone like he’s been hurt or believes he’s been hurt. Yet, the profile was finally coming into place once they realized that Amanda and the second teenager Matthew had one similarity. They were both bullies at school.

Amanda and Matthew attended Pillsbury High School and there had been several complaints filed against them for bullying. Though unfortunately, the school’s no tolerance policy doesn’t turn into action. So the school usually looked the other way with these type of situations and that led the team to believe that there was a chance that a teacher at the school might have gotten fed up. The BAU theorized that the Unsub was in their early twenties to mid-thirties and that he was possibly bullied in high school which was high both Amanda and Matthew had been surrogates.

So the team ended up speaking with the guidance counselor at the high school. Eric Bachan had been brutally bullied when he was a teenager and the police had actually been called after he attacked one of his bullies. However, Eric wasn’t the Unsub that they had been looking for. Eric had worked through some of the scars of his childhood and he works as a guidance counselor now because he wants to do as much as he can to protect kids that were like him. Teenagers that had been ostracized because they didn’t fit in with whatever was popular. And so Eric ended up knowing more about the bullying at school than anyone else.

Eric later gave the team a list of all the bullies at the high school and the BAU had tried moving them all into protective custody. But sadly they hadn’t been able to get to Austin in time. The Unsub had chosen to target just Austin so he gave up on wanting to punish the bullies and was beginning to kill them off personally. So the team did investigate Austin’s death to see what had changed and the basic overall told them a lot. Austin had been shot six times and then bludgeoned with one of his trophies so that told the team that Austin’s death had been personal. And the fact the trophy had been returned to Austin’s room showed that the Unsub wasn’t a man – he was a teenager.

The teenager in question was Kyle Eckland. Kyle had once been taped to the hoops at the basketball court and it had been Austin that repeatedly threw a basketball into Kyle’s face before leaving the injured Kyle at those courts over the night and into the next morning. Kyle’s mother had left him when he was little and his father was an alcoholic. So there hadn’t been anyone to care about Kyle except for his friends. Kyle and his friends created the Anti-Terror Squad and the squad was a way for them to protect themselves against the bullying.

They would travel in groups and message each other about which hallway to avoid. So the BAU had been alerted about his group and they had thoroughly looked into them in case they were all the Unsubs. However, no one else had been involved and the team found that out for themselves when they found all but one cell phone at the school. Kyle’s friends had apparently thought about turning him in and Kyle had found out about that. And it had even made him so angry that he was willing to turn against them all.

Though fortunately, Emily found Kyle and his terrified friends at the basketball court. Kyle had brought them there by gunpoint because he thought that they were ungrateful about what he did for them. So it had taken Emily all she could to talk him down and show him that his friends didn’t deserve to be hurt just because they didn’t agree with him. They were the people that had tried to protect him and they had truly tried to help. And so Kyle did eventually put the gun down before he could hurt anyone else.