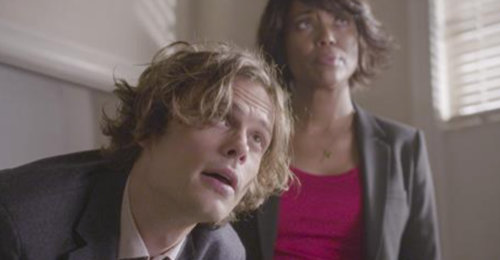 Tonight on CBS Criminal Minds continues with an all new Wednesday March 16, season 11 episode 17 called “The Sandman,” and we have your weekly recap below. On tonight’s episode, the BAU searches in Wichita for an UnSub who is abducting children while their parents sleep.

On the last episode, when Morgan was abducted, the BAU scrambled to find him and saved his life. Series star Thomas Gibson directed the episode. Legendary actor Danny Glover guest stars as Morgan’s father, Hank. Did you watch last week’s episode? If you missed it we have a full and detailed recap right here for you.

On tonight’s episode as per the CBS synopsis, “the BAU searches in Wichita for an UnSub who is abducting children while their parents sleep. Meanwhile, Morgan tries to learn who was responsible for his attack.”

Morgan has physically recovered from what happened to him when he had been kidnapped however he’s recently decided to look into who could have possible have wanted him dead as a way to move past everything psychologically. And on tonight’s episode of “Criminal Minds” he’s making list. Lists of cases, places, and names.

Yet for something special, Morgan had put everything aside in order to focus on Savannah and the baby they were about to have. Thus he eventually let his friends at the BAU drag him to a surprise baby shower that wasn’t so much a surprise and it had been such a happy event that Hotch hadn’t wanted to ruin it by telling everyone about a new case in Kansas. That unfortunately was about a double homicide and a child abduction.

Apparently Ronnie Brewer had been taken from his home after the UnSub managed to fill both of his parents’ eyes were with sand and them glued their eyelids shut. So the BAU were later able to determine that a ritual had been involved however their UnSub had still managed to kidnap the Brewer boy as well as fracturing his parents’ skulls. And therefore they wondered if there might be more than one UnSub.

At first it had seemed impossible for one person to do all of those things and not be interrupted, but the crime scene at the Brewers had offered some insight. The UnSub had removed a heavy chest of drawers to block off the stairwell. Which could have been a way to stop the child from fleeing the scene as well as protect the mother from wandering around. Though it had felt odd to them that the UnSub would have wanted to shield a woman he would later torture so they had dismissed the idea until they heard back from the medical examiner.

And it was the medical examiner that told the team, the father had been killed outright while the wife had taken longer.

So it had appeared as if the UnSub had somehow “punished” her more and that had drawn the team’s notice yet eventually they were consumed with their third murder. They had found Ronnie Brewer’s body a couple of miles away from his home and an autopsy showed that he had been killed not long after his parents. And that he hadn’t been abused in any way.

But that led to the BAU questioning the man they had on their hands. A typical sex offender wouldn’t have gone through trouble of kidnapping the boy as well as murdering his parents if his plan all along to just kill the boy in the end. So the team had taken a second look at the first crime scene and in time they were able to determine that the children hadn’t been the primary targets. It had been the mothers.

A fact they only truly realized after a second family in the area had been targeted!

The UnSub had tried to do everything the same as before, but the BAU had thought he had made a mistake with the Zumwalt because the mother was still alive. She had survived her attack and later she able to recover somewhat. Just enough to tell the BAU that the UnSub had been wearing goggles as he stood over her. And she said that the only thing he had mentioned in all that time as he was attempting to beat her to death was the number “eleven”.

However, Ellie Zumwalt’s medical file showed that the UnSub hadn’t meant to killer. To be quite honest it had looked as if he had gone much easier on her than her. Which had been like the last case in a way though the team had mistakenly assumed an accident involving that chest had been done intentionally. When really the UnSub hadn’t meant to cause blunt head trauma.

He did mean on the other to pour sand made out of teeth enamel into the victim’s eyes. So that’s how Garcia found him. She found an old report on Patrick Sorenson after he had been kidnapped by a pedophile who told him if he didn’t cry or make a sound until the sand in the hourglass ran out then he wouldn’t die. And who also later dropped him off at a park eleven hours later.

Yet, the UnSub’s mother had been alcoholic who had passed out in the backyard and so Patrick had always blamed his mother for that as well as leaving a goodbye note on the kitchen table afterwards. And so to get him to release the Zumwalt girl he was still holding captive – they talked Ellie into doing a false public plea where she pretended to be Patrick’s mother because that’s the closure he wished got but failed to get once his mother died six weeks ago.

And therefore Ellie bought her daughter time. Patrick had waited to hurt Josie and the BAU had ultimately found him before he could fully stop pretending that Ellie was his mother. So Josie was thankfully returned to her mother after everything and Patrick won’t be hurting anyone else thanks to Rossi. Who was forced into shooting him before he could attack.

But, just when everything looked as if nothing could go wrong, it did. And someone took a shot at Morgan and Savannah!