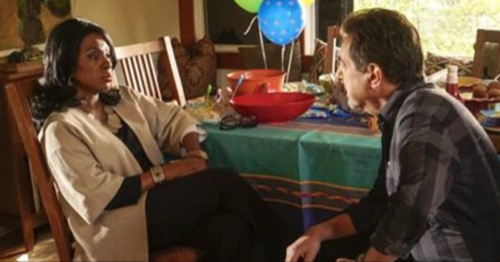 Tonight on CBS Criminal Minds continues with an all new Wednesday April 13, season 11 episode 20 called “Inner Beauty,” and we have your weekly recap below. On tonight’s episode, the BAU searches for an UnSub who is purposely disfiguring victims.

On the last episode, when former BAU team member and current Interpol Agent Emily Prentiss tracked an international serial killer, she enlisted the help of her friends at the BAU after she was convinced the UnSub’s next victim was on American soil. If you missed it we have a full and detailed recap right here for you.

On tonight’s episode as per the CBS synopsis, “the BAU searches for an UnSub who is purposely disfiguring victims. Meanwhile, Rossi has an awkward reunion with his ex-wife, who kept his daughter, Joy, a secret from him for nearly 30 years.”

Agent David Rossi had been enjoying one of his rare days off on tonight’s episode of “Criminal Minds”. Apparently his grandson Kai had a birthday party so Rossi had stayed behind to celebrate it and even help clean up seeing as his daughter was stuck in Sierra Leone at customs. So everything had been fine until David’s ex-wife showed up. It turns out Hayden had wanted to see her grandson on his birthday as well so she had finally agreed to see Rossi again.

Rossi though didn’t understand where all of her animosity was coming from. She had divorced him without telling him that she had been pregnant with their daughter and then she decided to ignore his phone calls because he had found out about Joyce and had wanted to ask her why. So now that’s she agreed to see him, Rossi took the opportunity to ask why it had gone so wrong between them. And what could he have done?

And the only thing Hayden could say was that Rossi hadn’t put her first throughout their entire marriage. Which hadn’t seemed fair to David. So he was just about to refute that if not ask for a better explanation when Hotch called. Hotch hadn’t meant interrupt Rossi on his day off, but he told them that they had gotten a call to Sacramento.

It seems that bodies of two Jane Does had been found in a water tank. Though JJ had apparently noticed a similarity between their UnSub and a serial killer that had once worked the same area. So she realized that their latest UnSub was probably going to do the same thing after his first dumping ground had been found. And so she told Rossi that he just going to keep killing albeit in a different location.

So right away the team had figure something out about their UnSub. He had a routine yet he wasn’t obsessed with it. And an autopsy of the bodies had proven that more than anything else. Both Jane Does had been found with dyed hair and also facial scarring. But the Medical Examiner had told the BAU that their UnSub had used two different knives to create the scarring.

Almost as if he wanted to make then break the women he had kidnapped. However, the third body had put everything in focus. The third Jane Doe had been in a covered Jacuzzi so that’s when the team realized that it hadn’t been just about water. It had also been about covering up the victims so that they couldn’t be seen.

And the third victim did help identify another one of the Jane Does. Belinda Cameron had been a recovering drug addict when she missing so a cross reference between her and someone that had a rose tattoo on their arm yielded another name. It told the BAU that both Belinda as well as Leslie had been recovering when they were targeted.

So the victims and possibly the UnSub had been part of the same recovery group. Yet, their physical appearance had all been changed so the victims were most likely using them as surrogates. And the guys had a hard time figuring out who that surrogate had been until their UnSub began to devolve.

The UnSub had accidentally left an implant in one of his victims so that sparked something in Reid. He looked at the scarring on the victims that had made them all believe the UnSub was a sadist and he saw that the surrogate hadn’t been in an accident. She had most likely had a facial deformity and so he had Garcia look into it. And Garcia found Sarah.

Sarah had been born with the deformity and for some reason she had killed herself three days ago by purposely drowning herself in her parent’s pool that she had covered herself. So that’s where the obsession, the UnSub had, came from. But the fact that the victims had all been wearing the same dress as Sarah had been wearing when she killed herself – the UnSub must have been the one that had found Sarah.

And so they found out about Joseph Berzon. Joseph and his mother had been in a nasty car accident when he was young and she had been bed ridden until she eventually died from her injuries. However, Joseph was then put into the system and landed in an abusive home. So he had a rough upbringing that basically taught him that everyone leaves.

But the trigger had been Sarah. Joseph had tried to get her to go outside and unfortunately that caused an anxiety attack. So Joseph has been trying to recreate her in order to get it right. And protect her from the outside world.

Only the guys later pointed out to Joseph, after they found him still trying to fix the past with Danielle, that Sarah wouldn’t want to hurt innocent people just to get her back. So Joseph did peacefully turn himself in and Danielle was able to receive the medical care she actually needed. Rather than the poor attempt Joseph had been making.

So when the case had wrapped up, Rossi had gone back to his daughter’s place and he had talked things over with Hayden. It seems JJ had pointed out to him that he had been obsessed on the job once and hadn’t allowed anything or anyone to shift his focus. And therefore Hayden had been right when she said he hadn’t put her first. And if he couldn’t do that with her, she probably thought she protecting Joy.