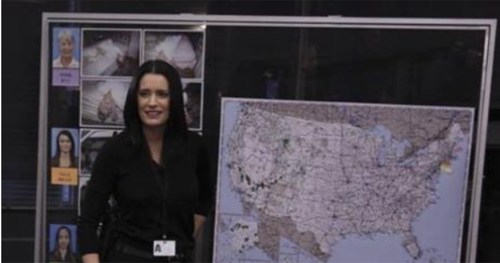 Tonight on CBS Criminal Minds continues with an all new Wednesday March 30, season 11 episode 19 called “Tribute,” and we have your weekly recap below. On tonight’s episode, when former BAU team member and current Interpol Agent Emily Prentiss (Paget Brewster) tracks an international serial killer, she enlists the help of her friends at the BAU after she is convinced the UnSub’s next victim is on American soil.

On the last episode, when an UnSub targeted the BAU, and the team went into action to find out who was responsible. Did you watch last week’s episode? If you missed it we have a full and detailed recap right here for you.

On tonight’s episode as per the CBS synopsis, “when former BAU team member and current Interpol Agent Emily Prentiss tracks an international serial killer, she enlists the help of her friends at the BAU after she is convinced the UnSub’s next victim is on American soil. Also, the BAU deals with Morgan’s departure from the team.”

An old face appeared on tonight’s episode of “Criminal Minds”. Apparently the BAU’s former agent Emily Prentiss who had left the unit to explore a career in Interpol, had needed her friends help with the man she’s been tracking. It seems she found traces of a serial killer that prefers to replicate famous serial killer’s crime scenes and unfortunately this man she had been looking for had popped up in New York. Where he’s been replicating the Son of Sam.

Now Hotch understood Emily’s concern and he knew that certain cases can affect an agent more than others. Yet she was asking him to deliberately step on a few toes because going to New York required a lot of cutting through the red tape. The NYPD hadn’t after all asked for their help and there had been only victim reported so far in New York. Meaning it couldn’t be classified as a serial, but Emily found a way around that one.

The UnSub in question had left a body trail in Boston as well as two other countries. So that meant he was prolific yet Reid had been more concerned about what all that meant. He and the guys had been speaking on the plane to New York and they theorized that the UnSub was highly intelligent and that they had access to funds. Implying that they were rich enough to fly in and out of the country at will.

So the UnSub was slippery however his pattern for following serial killers that came before had helped the BAU. When the Son of Sam first began his reign of terror, he had targeted two people and had left one alive. And therefore it wasn’t that much of a stretch to assume that the person that was willing to copycat everything the original Son of Sam did would also leave behind a witness as well.

And he did. The UnSub left behind Monica. Monica had seen him and the other victim, but he had let her live because he was that invested in replicating the original crime scene. Even though it would put his own identity at risk as well as give the FBI a working decryption of him. Thus the UnSub was more obsessed than everyone had assumed.

But they had tried to catch him with that obsession. They knew where he would strike next seeing as he was going to try and get as close to Berkowitz’s crime as possible. So they had set a trap believing that they could finally catch him and somehow he managed to elude everyone. He got nearby in order to leave behind his two victims yet he had made a run for it before anyone in the area could catch him.

Hence the investigation suffered a setback. Or that’s at least what they before they took a closer at the victims. The couple that the UnSub had shot were a wealthy older couple and they differed from the Son of Sam who was misogynist. And also only shot a man after he mistakenly thought the victim was a woman with long hair.

So the UnSub hadn’t wanted to follow Berkowitz anymore. He had merely wanted to make a point and that point had been his hatred of wealthy people. Apparently the UnSub had reloaded his gun several times to shoot the couple as much as possible and so that meant their deaths had been something of a trigger. They had reminded him that they had something that he would never have.

Which means the BAU were wrong with their initial profile. The UnSub was multilingual and he was educated, but he probably did not come from money. So there was a chance that he’s been faking it in order to pretend. And there could have been a traumatic moment in his past that set him off and made him believe he didn’t have to pretend anymore.

However, there must have been something that takes up the UnSub’s time seeing as he’s only killed from March to September. Thus the BAU looked into that angle as they tried to figure out where their UnSub would go next. The unsub had apparently quit New York after his last failed job so there was a chance he was looking to replicate someone else.

Only nothing could be confirmed right away. So though it didn’t seem as it was the right thing to do, the BAU had to wait for either their UnSub to make the next move or Garcia to find him with facial recognition. And thankfully Garcia hadn’t left them in limbo for long. She had found Michael Lee Peterson and he had last been seen entering Chicago.

Michael was a deckhand on a fishing boat so that meant he was only getting his thrills from such an adrenaline job from October to February. Yet Michael was something of a junkie. He lived to push his limits and so the man deemed a narcissistic copycat killer that hates people who have money had showed up in Chicago to replicate one of the worst crimes in history.

He wanted to replicate Richard Speck. Speck had raped and murder eight student nurses in their dorms. And it didn’t help that Speck had once been imprisoned with Michael’s own father. Michael’s father had been a petty thief that had gotten locked up for it so Michael had grown up visiting his father in prison and he had seen prison hierarchy for himself. Where serial killers are nearly treated as top of the food chain.

So that’s how Michael came to idolize such men and his trigger had been his father’s death two years ago. Which then put him on a killing spree. Only the students he had tried to target had seen the FBI warning and one of the girls had recognized his picture. And so she had already alerted the FBI to where he was going next, though they hadn’t been fast enough to catch Michael before he could get back to the all-girls dorm.

He had pushed himself in and had already killed someone by time they showed up. But Emily hadn’t wanted to give him anymore chances to hurt anyone else so when she saw a chance – she took it. And put him down before he could even get the chance to enjoy his new notoriety.

And while she was finally able to stop the man she’s been looking for, there was a part of Emily that had wanted to forget him just as fast. So she had gone out to drinks with her friends afterwards and they managed to play catch up with everything that’s happened since Morgan left.