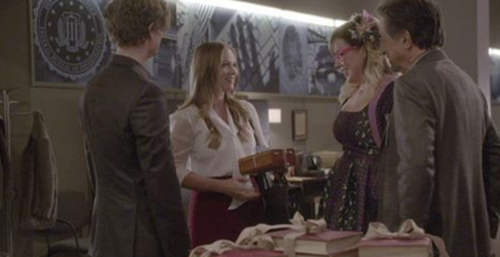 Tonight on CBS Criminal Minds continues with an all new Wednesday April 20, season 11 episode 21 called “Devil’s Backbone,” and we have your weekly recap below. On tonight’s episode, the BAU enters into a dangerous game of cat-and-mouse with a convicted serial killer after guards at a Virginia prison intercept a package with evidence relating to the kidnapping of two boys several years ago.

On the last episode, the BAU searched for an UnSub who was purposely disfiguring victims. Did you watch last week’s episode? If you missed it we have a full and detailed recap right here for you.

On tonight’s episode as per the CBS synopsis, “the BAU enters into a dangerous game of cat-and-mouse with a convicted serial killer after guards at a Virginia prison intercept a package with evidence relating to the kidnapping of two boys several years ago. The team believes the notorious killer may have information on the boys’ whereabouts.”

A prisoner at Fletchen Correctional Center received an unusual package on tonight’s episode of “Criminal Minds”.

Apparently the infamous serial killer Antonia Slade had received a package of bloody clothes from behind bars and a DNA test showed that those clothes once belonged to two missing teenagers from Virginia. Only there had never been a connection between both cases until the mail room found the clothes. And DNA as well as police reports listed those clothes as the last thing that either of boys had been wearing.

The first victim had had parents that had just gone through acrimonious divorce so his single mother thought and had even told the police that her husband must have taken him to Mexico. However, the second victim had been in foster care. Both his parents had been drug addicts and he had run away once before. So the police had assumed things about both boys and it led to them looking at a runaway and a case of custodial interference as two different situations.

Only the BAU were unfortunately left with more questions than answers because of it. The team had quickly been alerted about the clothes and the boys, but they had been left with so many questions that they knew they had to face off again with Antonia Slade. A woman they had put behind bars some years ago after she ran a “Runaway” hotline that lured just her type of victims to her home. And then buried them not far from the house that was supposed to be a safe place for them.

Yet, Antonia was a tough one. She had killed over a dozen teenagers that had come to her for help and she had never revealed why she did it or ever speak up towards her own defense. So the Warden at the prison had thought the FBI wouldn’t be able to get information out of her and he had actually gone to see her to warn her to be nice when she had the last laugh. Antonia had never seen her package, but she had told the Warden that the FBI were coming to see her to ask about the bloody clothes so she at least knew more than they did about those boys.

And unfortunately Antonia said she’s not helping anyone until she gets what she wants. Which amongst other was to be moved to a prison in Kentucky though no one was going to grant her that and odds are she already knew that. So Antonia was basically living up her initial profile. She was an extreme narcissist that demanded to be in control of the conversation at all times and so it hadn’t made any sense for her not to answer any of her fan mail.

So the team quickly realized that she was answering her mail, but she was hiding it and using other means to get her letters out. And if she was doing that, then they knew she probably knew what happened to the boys and who had taken them.

And then came what happened to Reid. The agent had asked her about cipher as in the one to that gave her fans explicit instructions in the text rather than text itself and she decided to answer him by spelling the cipher out in regurgitated food in the palm of his hand.

So Antonia likes the shock value of her actions and it turns out she had managed to get a guard to help deliver letters by extending protection out to the prisoner the guard was having a thing with. However, the agents later came to the conclusion that the two missing boys were still alive when some of the blood found on the clothes was shown to be from an animal. And therefore they knew they had a chance of rescuing the boys yet they could only do so by giving Antonia what she wants.

And what she wanted, or the only thing she’s ever stated she wanted, was a transfer. So the BAU were forced in the end to give her one. They had loaded their own private jet and had given Antonia a personal escort to Kentucky, but Antonia had given them a few pieces of information. She had told them that he was bringing the children to Kentucky as well and that he was going to drop them off somewhere outside of Lexington.

Though time was short. Reid had eventually deciphered her coded message to her to ultimate fan and it told him to redeem himself during the full moon. Only the full moon was literally hours away and they had no idea how Antonia was going to contact her follower to tell him not to hurt the boys. So those that were on the plane with her literally had to do everything Antonia said. Including unshackling her handcuffs.

Back in Virgina, however, Garcia found out who Antonia had been talking to. His name was Claude Barlow and he had been one of her patients when she used to do private counseling sessions in Kentucky. Yet it gets strange after she closed her practice there and moved to Virginia where she soon began killing kids. As it turns out Claude had followed her to Virginia and he had forced her to get a restraining order against him. And so he had gone dark for a while.

Until, that is, she had gotten arrested for murder. That’s when Claude began showing up outside of her prison and he had tried to see her in prison. But she had denied all visitations and it seems she hadn’t taken an interest in him until she wanted something out of him. And in this case, she wanted his help to upset the BAU.

Whom she led to the kids by the way and so she had told Claude to kill himself after she had helped the BAU rescue the two boys. Though no one knew why she did what she did. Which was setting everything in motion and then getting rid of her most loyal follower. So some had thought she did it for the sheer excitement and to get out of her prison for a few hours.

But Hotch had a different theory. He took a second look at Antonia’s past and he profiled her as someone overcome with self-lathing after she had gotten pregnant as a teenager and her authoritative father made her give birth off the grid. So he told Antonia everything he had found out about her and, though she was rattled, she told him that as a reward she was going to warn him about a storm coming.
And Hotch wondered if that storm had anything to do with her baby.